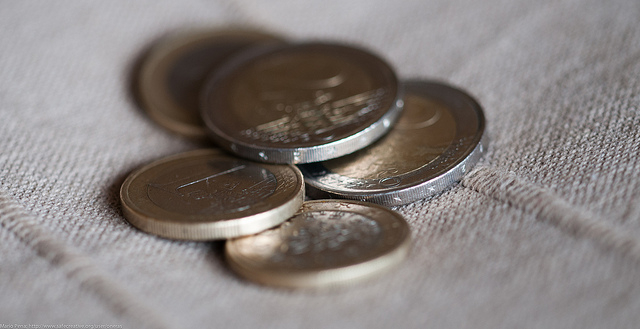 It seems unlikely - but not impossible - a major bank will be allowed to go bust. Perhaps governments have learnt from allowing Lehman Brothers to fail, an event which perhaps did more than any other to undermine inter-bank activity and which created a public lack of confidence in the banking industry.

New EU rules were introduced last year requiring member states to increase their bank deposit guarantees to €100,000. In the event a bank fails in France, the national deposit guarantee scheme (Fonds de Garantie des Dépôts) will refund savings up to that limit. Any savings above that may be lost, though you may receive more following any distribution of assets as part of the insolvency process.

Deposits are covered per depositor, so couples with joint bank accounts have €200,000 protected. The guarantee is also per banking group, so if you have €50,000 in a current account and €150,000 in a savings account with the same bank, only half of your money is protected. One group can have banks with different names, so if you use more than one bank check if they are part of the same group (see: www.tinyurl.com/BankGroups).

Under recent proposals, by the end of 2013 compensation will be paid within seven days.

In the UK the deposit compensation limit is £85,000, again, per depositor, per group (eg. note that Halifax and Bank of Scotland are in the same group). The FSCS aims to compensate within seven days or possibly 20 in “complex” cases.

Banks in the Channel Islands or Isle of Man are not covered by the FSCS, even if they are divisions of UK ones. You will need to rely on local schemes. The compensation limit in the Isle of Man, Jersey and Guernsey is £50,000. They also have an overall cap on amounts they need to pay out - in Jersey and Guernsey, £100 million per five-year period (in my view, inadequate). If claims exceed this, compensation will be reduced pro rata. The Isle of Man’s cap is £200 million (still not high enough).

It is advisable to hold cash deposits equally between you and your spouse or partner up to upper protection limits and for additional deposits to be held at a similar level in an appropriate number of unrelated banks. So, for example, if you have €1 million you need five unrelated shared accounts to be fully protected. The paperwork may be a little more onerous but at least your savings are not at risk.

Investment assets are protected differently. In France the limit of compensation if your investment institution goes bust is generally €70,000 per person, per institution. See: www.tinyurl.com/ProtectFrenchInvestments

The only certain way for investors to achieve security from institutional failure is through a 100% state-controlled protection regime. In the EU, Luxembourg stands out by offering this. For most expats in France the tax advantages offered by assurance vie combined with the Luxembourg’s investor protection is a winning combination - Luxembourg-based assurance vie policies enjoy the same preferential tax treatment as ones offered in France.

The cornerstone of this level of certainty is the legal requirement that an independent custodian bank, approved by state regulator the CAA, must hold all clients’ assets. This ensures legal separation of client assets from the insurance company’s shareholders and creditors. Investors are therefore fully protected from exposure to the insurance company’s credit risk.

The insurance company maintains a register of all assets and how they are invested, which is monitored by the CAA. All policyholder assets are deposited with a custodian bank where these assets are ring-fenced - i.e. they are off its balance sheet. If the bank fails, these securities remain in segregated client accounts.

Many British expats in France have taken advantage of Luxembourg’s favourable arrangements. With continuing uncertainty hanging over a number of institutions, now is a good time to make sure you are not going to be a willing victim of a bank or investment institution failure.

This column is by Bill Blevins of Blevins Franks financial advice group (www.blevinsfranks.com) who has written for the Sunday Times on overseas finance for 10 years. He is co-author of the Blevins Franks Guide to Living in France.

5 hours ago
5
Covid France: Calls for AstraZeneca vaccines for over 65s