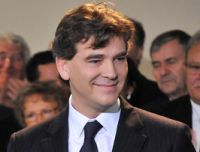 PHARMACISTS, notaires and bailiffs may have to cut their charges by as much 20%, if the finance ministry acts on a report into 37 regulated professions in France.

The unpublished General Inspectorate of Finance report into 37 professions has found that they benefit from a protected position that has allowed them to inflate their charges, according to Les Echos.

The newspaper, which says it has seen a copy of the report, said that it recommends targeted reforms to cut costs for hard-pressed households.

Economy minister Arnaud Montebourg hinted in a speech last Thursday that Bercy had certain “privileged” professions in its sights. He said: “Many professions are in a monopoly position and set their prices at a level that hits the purchasing power of households.

“This is the case for bailiffs (huissiers), clerks of the commercial court, lawyers, certain health professionals and other regulated professions, including driving instructors and dental technicians where lower prices are required.”

He said possible reforms, such as ending monopoly status or capping tariffs, could increase the purchasing power of households in France by up to €6bn.

A finance ministry spokesman said the minister would make the report public “at the appropriate time”, but also warned that some of Les Echo’s figures did not match those contained in the report.

The newspaper said that a clerk of the commercial court can earn €10,000 net per month, while huissiers could take home €6,000.