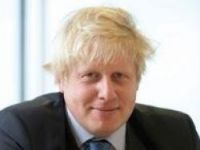 LONDON mayor Boris Johnson has thrown open the doors of the city to "talented French people" who want to flee the "tyranny" of France under President Hollande.

Speaking at a Tory Party conference meeting in Birmingham he said: "Not since 1789 has there been such a tyranny and terror in France."

More than 300,000 French people already live in London - it is sometimes called the sixth city of France - and Johnson said he would welcome more tax exiles.

"I am very pleased to welcome talented French people to London if they come to power our economy - if and only if they do not deplete our national resources".

He slipped into French and added: "Vous êtes tous bienvenues!"

The outspoken mayor is seen as a leadership challenger to Prime Minister David Cameron, who ruffled feathers in France when he said he was ready to roll out the red carpet for rich French people who wanted to flee Hollande's plans to tax the wealthy with a 75% top rate.

Riding on the crest of a wave since the success of the Olympic Games, Johnson was speaking just 69 years after General de Gaulle declared in Ajaccio that Corsica had been liberated, the first part of metropolitan France to be freed from the Nazis.