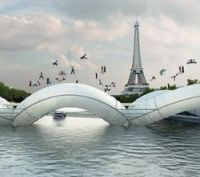 A FIRM of Paris architects has won a prize for a bridge proposal which would involve people bouncing across the Seine on giant trampolines.

AZC, run by a pair of Strasbourg architecture graduates, is causing worldwide interest with their bouncy bridge, after winning third place in ArchTriumph, a contest which invited ideas for a 38th Paris bridge.

Their design is made up of three inflated PVC "doughnuts", each 30m wide and 94m long, with a trampoline net suspended in the middle of each, and with each forming an arch over the river.

The firm said it wanted to raise questions of “urban enjoyment” and that the design would give a sensation of “joyful release from gravity as one bounces across the water”.

It thought Paris already had enough ordinary bridges for the flow of traffic and pedestrians over the river, so it came up with a “newer and more playful path”.

The firm states there is no chance of falling into the river from the structure and that it moves in “symbiosis” with people using it.

It hopes to submit the idea to Paris mayor Bertrand Delanoë.

The firm that actually won the prize was FaceB from Lille, with a design for a bridge linking the Ile-de-la-Cité to both banks. As well as crossing the water, one side of the bridge stretches down to the water in a series of steps.

20 hours ago
3
What could France’s traffic light plan mean for summer travel abroad?