Breton past lives on in homes 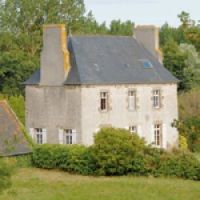 From Breton longères to provençal mas or the half-timbered homes from Alsace, there is huge variety among traditional French architecture. This month we are looking at the typical styles of home found in Brittany, ranging from the former homes of fishermen and smallholders to the grand manors of rich shipowners of the 18th century.

HOUSES in Brittany come in several traditional styles, with keywords being robust construction from local stone and plenty of space - whether the home is a rustic converted barn or one of the grand malouinière manors from the area around Saint-Malò.

Breton homes are often south-facing to make the most of the sun in this northerly region, and with the gable west-facing, making a buttress against the wind.

They are often made from granite (for example in the Côtes d’Armor) and natural slate roofs are traditional - having taken over from thatch in the 19th century, because of the lesser fire risk.

Estate agent Nadine Loussaut of Plonéour Immobilier in the Pays Bigouden (Finistère) said the most typical construction styles in this largely rural region are the penty and the longère. “Pen means ‘head’ [as it also does in Welsh] or a lump or bit, and ty means ‘house’ - it means a little detached house - they’re made of stone and wood and the walls are 50-60cm thick.”

She added: “It’s not a kind of house that is being built now - pentys mostly date from 1800 to about 1930. The breeze blocks we know now first appeared after the Second World War - before it was just stone houses in Brittany.”

The penty is especially associated with Finistère and they were often fishermen's homes in the past.

Some say they remind them of English cottages. Often built near the seaside, at the edge of villages, they usually have steeply sloped roofs.

Shutters are not especially traditional in Breton houses, Ms Loussaut said, though now many people have added them to their pentys for security purposes, usually just for the ground floor.

The stone used is typical of the area, she said. “It’s found everywhere, in the fields - it’s like the construction in Cornwall in England - it’s local stone; and the roofs are made of natural slate, which is quarried around here.”

The longère - another typical Breton home - differs from the penty by its long, thin shape.

In the past they were often the homes of craftsmen or small farmers.

“They are at least 12m long and there’s no maximum,” Ms Loussau said.

“Sometimes they were several buildings to start with and people have connected them inside. Or it could originally have been a part of an ensemble of farm buildings and the longest building, which might perhaps have been a stable, has been kept and converted.

“In other cases it’s the main farmhouse, plus adjoining buildings for sheep or pigs, that have all been retained, to make one longère.”

She added: “Here we like having plenty of space - long buildings and big rooms - so we sometimes take out walls so as to have big living areas. We’re lucky, compared to the south of England, that we have big houses here.”

Inside it is very typical to leave the walls with open stonework, said Ms Loussaut - though not necessarily everywhere, because wall insulation has become a priority in these economy-conscious times.

“There may be a chimney with visible stones and an old-fashioned open hearth. There are also often open beams, which people appreciate because they are really typical.

“We try to keep these features if we can - for example if the building has cladding on the outside then we might leave the stonework visible inside, and vice versa.”

Ms Loussaut said a lot of traditional longères have been rearranged inside.

The entrance to a longère is usually in the middle of the facade. When they were built, you usually entered into a narrow corridor with a kitchen on the left and a bedroom to the right, with a chimney in each. Upstairs there was just a grain loft.

“My house was like that when I bought it,” said Ms Loussaut. “Now what we like to do is to knock the dividing walls through and have one big main room, with a kitchen section and a lounge part, and then we make bedrooms and a bathroom upstairs.

“Usually the dividing walls are just wooden; it is the ceiling beams that support the house.”

She added there are also some thatched cottages - chaumières - in the region. “It’s quite rare now, but some people who are very into ecological living still do that.” Thatch is most likely to be found in the Morbihan today.

Longères are mostly found in the rural parts of Brittany and are now used as chambres d’hôtes, appealing to holidaymakers because of their typically Breton look.

Another kind of traditional Breton home, built for those at the upper end of the social scale, is also now sometimes used for smart chambres d’hôtes: the malouinière - a kind of Breton manor house named after the adjective for an inhabitant of Saint-Malo, malouin.

Estate agent Christine de Courville of Cabinet H&C de Courville, which specialises in Breton manors, said: “A malouinière is unique - real ones are usually found between Saint-Malo and Cancale [along the coast to the north], especially in the area called Le Clos-Poulet.

“A malouinière must have been built by a shipowner in the 18th century, when boats were sent from Brittany around Africa to trade with the Far East and they would bring spices and porcelain back.

“There were many trading ships which left from Saint-Malo as well as Nantes and Lorient. It was a period when, unfortunately, France was also involved in the slave trade, but that was not the case for Saint-Malo.

“The shipowners had had enough of looking at the sea, which they associated with the daily grind, so they built in the countryside rather than in Saint-Malo - there is only one malouinière in Saint-Malo.

“What is very typical of the style is dormer windows in the roof, lined up with the façade.

“Another feature is stones placed perpendicular to the windows so they run around them like a band. There is also often a line of stones in a different kind of granite that stands out to mark the different stories.

“The roof is very steep - normally at least 50% - and there are big chimneys sticking out above the roofline."

The malouinières are considered to have an austere, almost military, style in comparison to Breton manors of earlier periods.

While some are privately owned - smaller ones can be found at around half a million - others are now open to the public, such as the grand Malouinière de la Ville-Bague (pictured above), which is an official historic monument, with a park of several hectares, a lake, dovecote, chapel and jardin à la française.

Inside it has period furniture and a collection of privateer’s weaponry, harking back to the time when some of the owners were corsaires - private sailors authorised to make pirate-style attacks on foreign shipping in times of war, with the booty being shared between the king, shipowner and crew.