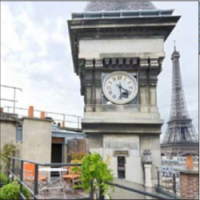 THE TERM atypique or atypical, is so overused by estate agents that one Paris immobilier has banned the word from its vocabulary.

“These days atypique is used to mean everything and nothing, and it is often associated with a property that has something wrong with it,” says the co-founder of estate agents Ateliers, Lofts & Associés, Cédric Resche,
He says his Paris-based agency was the first to market unusual properties, including former lofts and artist studios, in 1998, after which of agents began branding their properties atypique.

“We try to use real terms in our descriptions. Most properties are very specific places whether they are a former artists workshop which has a particular layout with large windows to keep the light for painting the same throughout the day, or a loft, which was originally used for storage.

“A truly atypical property is one that you can’t categorise in any other way, like the converted clock tower on a disused water tower on top of a 19th century building in Paris (pictured right).”

He says atypique has been rendered meaningless through overuse and usually indicates that an estate agent does not really know what they are selling. Maison de caractère (character) is another widely-used, meaningless expression.

“All properties, even contemporary ones, have some sort of character. And almost every house is atypical, apart from new-builds on an estate that have all be designed to be identical,” said Mr Resche.
Estate agent Joanna Leggett says her agents also avoid using atypique or unique unless a property really is like no other. But it still crops up.

“We have 11,500 properties on our books and sometimes it is hard to find new ways of describing them,” says Ms Leggett, who runs Dordogne-based Leggett Immobilier, recently named Best French Estate Agent at the European Estate Agents Awards.

“We would use it for a building, like the water tower, which is clearly atypique, or one that has an unusual architectural design. Sometimes we would use it for a property that has a genuinely unique feature, like a historic fireplace that is now very hard to come by. Sometimes a property is atypique because of its history. We are currently marketing a house once owned by Edith Piaf.”

Honesty is the best policy in France, where most estate agents are self-employed. If estate agents’ fees seem high, it is because they are only paid on commission, usually competing against other agencies to sell a property, unlike in the UK where they also get a base salary.

Leggett Immobilier trains its agents to write descriptions that do not exaggerate or hide anything, for their own sake as well as their clients’.

“It is different here,” says Ms Leggett. “It’s not that we are more honest than UK estate agents, but it is in our own interest to not oversell, particularly working in rural France where you can sometimes drive for more than an hour to show a property.
Otherwise you waste your own time and money - and petrol - and have a fed-up client. It’s not like in central London, where you can pop out to do a viewing and be back at your desk within the hour.”

As their client base is international, mainly British, they also use virtual tours, so they must be honest.
“We have sold houses to clients from just the virtual tour as it is really like being on a viewing. The tours show a clear picture of inside and out, so the description has to match this.”

We should be fair to both buyer and seller, says President of estate agents’ group Fnaim, JeanFrançois Buet, but we will not follow the example of one UK agent who recently made the headlines by being brutally honest about the undesirable flat he was selling.

“We are there to sell a property by pointing out its positive aspects. Highlighting the disadvantages isn’t more honest, it’s just not doing your job.”