French players in US independence 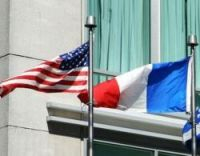 AS AMERICANS celebrate Independence Day today, many will also remember the important role that France played in their victory over the British.

For much of the war, American soldiers struggled against the superior forces that global superpower Britain could muster.

It was the French who turned the war, most dramatically at the Siege of Yorktown in 1781. It would turn out to be the last major battle of the conflict and ensured that France would become America's first and oldest ally.

One man, in particular, is responsible for French involvement in the American War of Independence, Gilbert du Motier, the Marquis de Lafayette - a man who would later play a key role in the French Revolution.

The young Marquis de Lafayette was the first Frenchman to heed Benjamin Franklin’s plea for help. Lafayette famously sailed across the Atlantic in his ship Hermione to the colonies to join the war. A year later, the Continental Congress made him a major general, even though he was only 19 years old.

Louis XVI, meanwhile was secretly sending money and weapons to the Americans.

In 1780, Comte Jean Baptiste de Rochambeau was appointed commander of land forces, as part of an operation codenamed Expédition Particulière. He was initially given some 7,000 French troops and sent to join the Continental Army, under George Washington. He had more soldiers under his command than the general who would become America’s first President.

In fact, the celebrated assault on Yorktown a year later was a mainly French operation. Washington’s commanded 9,000 men in his Continental Army, while there were about 25,000 French soldiers and sailors. In Chesapeake Bay, a fleet of 28 French ships defeated the vaunted British navy, cutting off supplies to the besieged British General Lord Charles Cornwallis and his troops and blocking their escape.

On October 19, 1781, some 10 days after Washington lit the fuse to fire the first shot of the siege, the Battle of Yorktown was over. Cornwallis surrendered, but in one final act of defiance, he refused to acknowledge the Americans and tried to surrender to the French.

The war was effectively over, but the Treaty of Paris - which formally ended the conflict - would not be signed for another two years.

Today, there are statues of Rochambeau in both Yorktown and Paris. At the foot of the one in Paris visitors can read George Washington’s tribute to France: “Independence which we have fought for and obtained after seven years of severe conflict must be attributed, in large degree, to the assistance of your nation and the bravery of her troops.”

Lafayette is remembered, too, in America. The park directly in front of the White House in Washington DC is named after him.

Read all about plans to recreate Lafayette’s voyage across the Atlantic to join the Americans in their fight for freedom in a lovingly created replica of his ship Hermione, in July’s edition of Connexion, in shops across France now