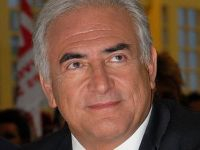 MOST French people believe the allegations against IMF head Dominique Strauss-Kahn are a conspiracy.

Around 57% of French adults questioned by survey firm CSA thought that was the explanation for the accusations of sexual assault and attempted rape faced in America by the would-be French presidential candidate.

When it comes to Socialist supporters, 70% accept the “plot” theory.

The survey also showed French people do not think the scandal has ruined Socialist Party hopes for winning the presidential elections next year.

In total, 54% thought they would win, rising to 70% for Socialist voters.

Most thought the second round of next year’s elections would see Sarkozy up against Hollande or Socialist Party head Martine Aubry. However, should the Socialists opt to elect Ségolène Royal as their candidate, then Sarkozy would face Le Pen instead, the survey said.

Mr Strauss-Kahn is being detained in one of the world’s largest prison complexes, Rikers Island, in New York, where he is said to have been placed on a suicide watch. As a well-known figure, he is also being accompanied by a guard at all times when in contact with other prisoners, for his safety.

A jury will meet next week to hear the elements of the prosecution case to decide whether or not a formal charge should go ahead. Mr Strauss-Kahn will then have to appear before the New York Supreme Court to hear the decision, at which point, if charged, he will plead guilty or not guilty.

His lawyers have said he intends to lodge a “not guilty” plea. They also plan to appeal against the decision not to allow him bail.