Invest in a cow! 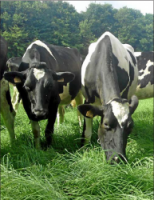 AN innovative farm funding plan is proving to be a real-life cash cow – giving investors a return of 6%, nearly five times that of France’s most popular savings account the Livret A.

Yvelines farmer Jean-Baptiste Galloo came up with an idea where people invest in his cows and get a return in kind, not money, based on the Middle Ages-era bail à cheptel or contrat de gazaille system.

He said: “I started four years ago after the banks refused me the loan I needed to grow the farm. I wanted a way to allow my customers, who all live locally, to be able to work with me and become more involved in the farm and the animals.

“When I read about bail à cheptel I remembered customers talking about wine investment where people were paid in bottles of wine. I thought that they could invest with me and be repaid in farm produce.

“I started with 10 cows in 2010: people paid €1,800 for each and we signed a four-year contract where I promised to give them vouchers for €108
each year to buy our meat or other products. They also get a 3% discount on all purchases.”

The €108 voucher equals a 6% return on their investment but Mr Galloo said both sides got much more out of it as the investors were also customers and would bring their families to see their cow, learn about farm life and buy farm goods.

Being paid in kind means there is no tax and Mr Galloo covers the feeding, rearing and health costs of the animals.
The first leases come to term later this year and Mr Galloo then buys back the cows at their original price. More than 100 other people now want to join the scheme and take them over.

The meat has to be picked up at his Ferme Aux Quatre Etoiles at Auffargis (see les4etoiles.free.fr). One family travels from 100km away to get theirs and see the cows.

A farmer in Ariège, Midi-Pyrénées is now also offering the scheme and Mr Galloo said he would like to see some sort of “crowdfunding” plan so others could benefit.
He said the plan had more than met his hopes and added:
“It saved my life. I would no longer have been able to farm if I had not found this.
“It allowed me to avoid dealing with the bank and my customers like the idea of investing in the local economy.”

A similar scheme is offered by the Rhône company Gestel which gives a cash return on investment. In this case there is no link with a specific farm and the money is spread across dairy herds throughout France.