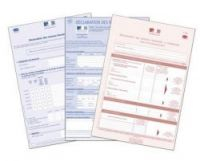 THIS YEAR’S French income tax forms are now being sent out, showing some changes to boxes, which affect how your 2013 income should be declared.

Many of the new forms and their notes are now available also at Impôts, though officials said they were waiting for everyone to get their paper ones before putting the main form online, as ones sent out will include some pre-filled details. This should be imminent.

Key points that we have identified concerning the new forms are as follows:

Taxable French bank interest is taxed differently as of 2013. Previously there was an option for a prélèvement forfaitaire libératoire (fixed-rate income tax at 24% taken off at source) or alternatively you could declare interest for it to be taxed at the normal income tax band rates.

As of 2013 all taxable bank interest has “on account” income tax at 24% taken off at source (though it is possible to opt out of this levy for the 2015 tax year if you apply to your bank by November 30, 2014, subject to conditions related to past income levels). These levies are not “libératoire” (meaning “freeing” you from further tax obligations).
The interest is also declarable and will then usually be assessed to the tax bands. Depending on whether this results in more or less than 24% tax payable you may then be due to pay extra income tax on the interest or be eligible for a refund.

If you have less than €2,000 interest you can opt to pay only the on-account 24% and not have the bands applied. This is of interest for people who have an average tax rate of more than 24% (see votre taux d’imposition on your last income tax demand). This not the same as your top tax band rate, and this option will for many people result in more tax to pay than the application of the bands.

The new form shows that French interest should now be declared as follows:

If your interest was less than €2,000 and you do NOT want the bands applied to it you enter this income in a new box, 2FA (though unlikely to be of relevance to you this year, you would also do this if you had opted out of on-account levies but still wanted to pay a fixed 24% tax).

Despite comments made to Connexion by government tax advisers earlier in the year as to the likely format of this year’s forms, there is no box to "tick" with regard to this 24% option. Likewise, it appears that box 2EE (which was used for the old prélèvement libératoire income) does not apply to this 24% option on the final form.

If on the other hand you want the interest to be assessed using the tax bands, then it should be entered at 2TR and the amount of the 24% tax taken off at source should be entered in a new box, 2CK. The latter amount now counts as a tax credit set against tax due from the application of the bands.

Following the changes this year there are still some grey areas with regard to aspects of declaring French interest, notably the use, or otherwise, of box 2BH. If in doubt please refer to the relevé fiscal (interest certificate) which your bank should have sent you as to relevant boxes for your interest.

There are changes to how capital gains from shares are declared, due to the new allowances for length of ownership. However, the main box names have remained the same. For shares owned for at least two years and less than eight the gain is reduced by 50%; from eight years 65%. In box 3VG you place the gain after any reduction for length of ownership, and in a new box, 3SG, you enter the amount of this reduction.

Any losses go in box 3VH again after applying the same reduction for length of ownership to the loss, and the reduction goes in the new box 3SH.

If you have eco-friendly tax credits to claim, these are all now done on the dedicated form 2042 QE. Last year these credits could be claimed in various different boxes and forms.

There is a new box, F, for your bank account details (to be used for example if you are due tax credit payments). If it is pre-filled and the details are incorrect the form asks you to include a bank RIB.

The tax office has also now publicised some other changes relating to this year’s declarations, as follows:

Paper forms will go out from April 9 and must be returned by midnight, May 20 - this is an earlier deadline than in previous years. Online declarations will be possible from April 16 and must be completed by midnight on, depending on department, May 27 (depts 01-19), June 3 (20-49) or June 10 (50+). Non-residents (people who own property in France that they let out – holiday homes etc) must declare by June 16 if they live in Europe, the Mediterranean basin, North America or Africa and before June 30 for elsewhere.

A simpler way to sign into your personal space on the website, with a chosen password, becomes obligatory. Also new, the site will give an estimate of your tax after you declare.

This time there are no longer different (full or simplified) versions of the main 2042 tax form.