Land in garden put to exciting use 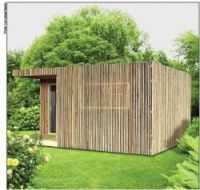 A FRENCH company has developed a new way for homeowners to offer living space in their garden – potentially bringing in rental income or providing a solution for anyone who regularly receive guests.

GreenKub, based in Montpellier, will deliver and construct a ready-to-live-in wooden studio at your address for €38,900.
It measures 18m and so avoids the need to apply to the mairie for planning permission.

The firm just needs to make a déclaration préalable de travaux – a basic formality needed for example if you change the colour of your shutters and which is easier to obtain.
This incurs a one-off taxe d’aménagement in the region of €1,000.

The company’s managing director, Alexandre Gioffredy told Connexion the idea is to solve two problems for people living in France today – the need to generate more income and the lack of housing.

“We see three uses for our studio – the first is student accommodation in large towns, the second is tourism and the third for personal use either as a granny flat, for an older child wanting more independence or as an extra room – for example an office in the garden.”

The 100% made-in-France unit could prove popular with anyone who has friends and family visiting from their former home country – giving both the guests and the hosts extra personal space.

GreenKub is working with rental agency Foncia which will take care of the administrative procedures for renting the unit out.

For a year-long rental agreement it is estimated that it could generate a rent of between €400 and €700 a month.

Tourist lets will depend on the local market, but one studio has been sold in the Mediterranean resort of La Grande Motte (Hérault) with plans to rent it out at €70 a night for three months in the year.

The price tag includes delivery, construction and connection to electricity, water and sewage services – with separate counters in the studio.

GreenKub says it will take 48 hours to put up – though joining up to the services will take longer and will depend on the individual property.

The company says it has designed the studio so it can comfortably include a kitchen/ dining area, shower and toilet, living/working area and media space (for a computer or television). It can be sold fully furnished or empty (for a reduced price of €30,000).

GreenKub believes the concept will mostly be popular for student housing.

Given the need for a large garden, it is not likely to be in a city centre but the company estimates there are many privately owned properties with gardens on the edges of large towns and cities in France ideal for this type of project.

The GreenKub studio has attracted interest from several hundred potential buyers and the group hopes to sell about 100 this year.