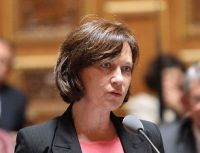 A DEBATE in Parliament on a planned law forbidding parents from smacking their children in France has been postponed.

Environmentalist MP François-Michel Lambert, had tabled an amendment to the controversial Family Law bill, which said that “legal guardians cannot use corporal punishment or physical violence against children”.

But the socialist-majority in the National Assembly postponed the debate on banning corporal punishment to an unspecified future date.

Accepting the delay, Mr Lambert said a ban on smacking would bring France in line with 18 other European countries.

"Violence is never obligatory to assert parental authority," he said.

Referring to a separate bill targeting child abuse - secretary of state for family and the elderly Laurence Rossignol said that the government preferred to debate smacking "in the context of the prevention of mistreatment of children".

She added that the law currently provided protection for children against physical mistreatment.

Under French law, violence against a child is outlawed, but it does allow for a “right of correction” of children by family members. Last year, however, a father was fined for hitting his son.

Speaking at the time the video was released, Dr Gilles Lazimi, a GP from Seine-Saint-Denis, who headed the campaign, said: “There is no such thing as a little slap, nor a little smack: all violence towards our children can have consequences for their physical and psychological health.”

The Family Law bill - of which the amendment would have been part - has sparked widespread controversy. If passed, children of divorced parents would have both homes as their legal addresses, and step parents would have more legal rights in connection with the care of stepchildren.

The centre-right UMP party opposes key aspects of the bill, and it has raised concerns among psychologists and single mothers.