Orange storm alert in the south-east 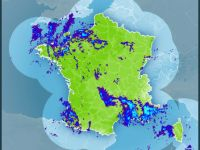 RESIDENTS in the south-east have been warned of severe rainstorms that will last until at least tomorrow morning – with the departments of Alpes-Maritimes (06), Bouches-du-Rhône (13), Gard (30) and Var (83) put on orange alert.

Forecasters warned of violent storms that could see 15cm of rain in Var and 10cm in Alpes-Maritimes.

However, rain through the night saw up to 22cm of rain in some parts of Aude and 12cm in southern Hérault before the weather moved east, allowing an overnight alert for Aude (11), Hérault (34) and Pyrénées-Orientales (66) to be lifted this morning.

Saint-André de Roquelongue, Aude was hit by a 22cm downpour, including 10cm in one hour in the middle of the afternoon that closed all three roads into the village for three hours.

It forced the school to keep 26 pupils inside for safety until the weather eased and similarly in Montredon-les-Corbières where 30 pupils had to shelter in the village hall.

Nearby Narbonne was also badly affected with an electricity sub-station being knocked out at Lézignan-Corbières that left 1,000 households without electricity and disrupted rail traffic. Seven Narbonne-Toulouse TERs were cancelled and the Barcelona-Toulouse TGV had to stop at Perpignan where passengers changed to another train.

Rainfall should ease in Gard this afternoon but continue into the evening in Bouches-du-Rhône. There will be little let-up for Var and Alpes-Maritimes until tomorrow and drivers have been warned of very reduced visibility on the roads.

The rains come after weekend weather that saw records broken in Pyrénées-Atlantiques, Creuse and Corsica where it was exceptionally mild: Aïcirits in Pyrénées-Atlantiques hit 28C or 14C above normal, Guéret-Bongeot in Creuse matched the 1994 record of 24C (15C above normal) and Sartène in Corsica edged to 26.9C (up 15C on normal), its highest since records started in 1996.
Weather radar map: Météo France