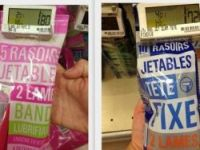 THE ECONOMY Ministry has decided to look into whether or not it is true there is a so-called “pink tax” on products aimed at women.

Officials have asked for breakdowns of prices so they can check allegations by campaigners that women pay more than men for the same kinds of products of the same quality.

The problem was raised several weeks ago by feminist group Georgette Sand, who started a petition to Monoprix, said to be one of the worst offenders, which has gathered 35,000 signatures so far.

The group, which has gone for the English term “woman tax”, also launched a Tumblr blog
to show examples of the problem.

Campaigners say the problem is not limited to supermarkets, however, but can also be found in haircuts, dry cleaning etc.

Georgette Sand had a meeting with Minister for Women’s Rights Pascale Boistard, who a few days ago joined the fray, tweeting an example of packs of razors – cited in the petition - which cost more for a women’s version even though there are only half as many blades in the pack.

Now investigators from anti-fraud body the DGCCRF have been told to investigate. Once they have collected prices from around France, the Economy Ministry plans to organise a meeting with representatives from the various sides of the debate.