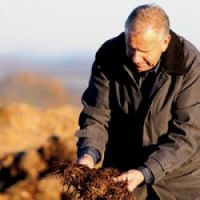 WHEN Marcel Mézy set out on his odyssey 30 years ago to create a nonchemical fertiliser that would sustain the environment rather than destroy it, people laughed long and hard. At that time, environmental concerns were not paramount and the damage caused by chemical fertilisers had not been fully evaluated.

“You have to be fantastically strong to succeed,” he says. “You have to believe in yourself and be able to withstand all sorts of criticism and ridicule.”

Today, his 100% natural, organic fertiliser Bactériosol is starting to change farming. “I call it the third agricultural revolution, if you count the first as the introduction of farm machinery and the second as chemical fertilisers.”

His invention is a compound of natural elements which speed up and intensify the earth’s natural ability to make humus, the organic matter that contains the nutrients and moisture that plants need to grow. He explains: “Instead of directly supplying plants with chemicals like nitrates, my fertiliser enriches the earth and plants grow better as a happy side effect of that and there’s no need for pesticides either.”

Until now, Mr Mézy’s invention has only been available to farmers, but now it is also being marketed for domestic use. His company Sobac has a manufacturing plant in Bourré, Loir-et-Cher, which employs 50 people and produces 40,000 tonnes of fertiliser a year. But rapid expansion is planned, to keep up with demand from their 8,000 clients in France, Canada and Morocco.

“I know that eventually everyone will want to use this system,” he says. “So we’ll have to explain to engineers how it happens, exactly how it brings oxygen into the earth.”

He launches enthusiastically into a detailed explanation of how the fertiliser is formed, the role of fungus, the development of humus in the earth: “You see it’s better than nature. More intense. But the results don’t do any damage.”

He goes on to say that if you put a spoonful of chemical fertiliser on a stone every week, eventually the stone will be eaten away and a hole will form, but if you do the same with his fertiliser, you will just end up with earth and plants will start growing on the stone.

It is vital, he says, not only for the environment but for human health. “We can prove that farmers who use our products have lower death rates among their young stock,” he says. “And that’s only livestock. Imagine what the knock-on effect is for human health. You have to eat good food in order to enjoy good health,” he says, pointing to the increasing incidence of diseases such as Alzheimer’s. “Pesticides attack the nervous system of an insect. And when humans ingest pesticides, what does it do to them?” he asks.

He has several hundred Arab horses where he lives in the Auvergne, which he breeds more or less for fun. “They are my pets,” he says. “I can’t sell them because I adore them.” And, of course, their diet comes entirely from fields solely treated with Bactériosol. “They’re all healthy, strong and beautiful. These horses can cover 160km a day, and I’ve bred two champions.”

However, building a successful business in France is not easy and he says that like many other businessmen he is in favour of liberalisation. “So many politicians’ promises have been broken,” he sighs. “Who knows if it will ever happen?”

Mr Mézy says France is a complicated country and business leaders are often afraid of competition, jealous of other people’s products, and keen to prevent new ideas from reaching the market: “I was taken to court four or five years ago by a collection of big international companies manufacturing fertiliser and was accused of practising unfair competition.” It was simply because his product is efficient, he says, and other companies saw that eventually he might easily corner the market.

“The thing I liked, though, is that I won the case because 30 farmers banded together to defend me and defend my products, explaining to the court that there was no unfair competition in developing a new invention.” The court agreed, as did the appeal court the following year. “The court agreed that it’s not my fault if my product is 60 years in advance of the rest.”

For the future, what interests Mr Mézy is the prospect of helping Africa not only become food independent but a major food exporter to the rest of the world. “In Togo, for example, they have a fantastic growing climate there. With Bactériosol they could have a thriving agro-economy,” he adds.