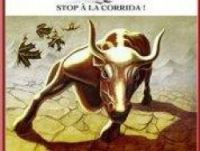 ANTI-bullfighting campaigners are preparing a mass letter campaign to the Elysée next week to call for the abolition of the "corrida" in France and for it to be removed from the list of country's cultural heritage.

Protesters have asked people to send red envelopes with their appeals for the end of bullfighting to the president on June 11.

They hope thousands of letters will arrive - post-free - on the desk of President François Hollande and prompt him into action to delete parts of the Code pénal which allows bullfighting and cock-fighting in certain parts of the country and to delete the reference on the heritage register.

Hollande has previously told animal charity 30 millions d'Amis that he wants to "find ways to ease tensions" over bullfighting and campaigners hope the change of government will also mean a move away from the Sarkozy government's support for the corrida.

Animal cruelty is punishable by up to two years in prison and a €30,000 fine but the Code has given special dispensation in parts of the country where there is "an uninterrupted local tradition".

This allows Spanish-style bullfighting - the corrida, where the bull is killed - to be carried out in 11 departments in the south-west, from Nîmes to Bayonne.

Protesters will send blood-red envelopes calling for an end to the corrida and petitioning for a national referendum on bullfighting. Letters to the president at Monsieur le Président de la République, Palais de l'Elysée, 55 rue du Faubourg Saint-Honoré, 75008 Paris are free of charge as they get a "dispensé d'affranchissement" which may be noted on the front of the envelope.

A survery by Ifop in 2010 - after the Spanish region of Catalonia banned bullfighting - found that 66% of people in France were opposed to the corrida.

Last year around 100 silent protesters who took over the bullring in Rodilhan were attacked and beaten by bullfighters and corrida supporters.