Row over cribs in public places 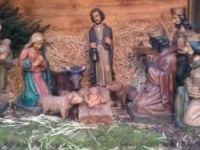 ROWS have broken out over whether or not it is acceptable to display Christmas cribs in public buildings.

A crib has been banned by a court from the building of the conseil général of the Vendée after a local ‘freethought’ group brought legal action. Now in a second case the mayor of Béziers is under pressure from secularism groups and left-wing councillors to remove one from his mairie.

The association Libre Pensée has said they will go to the administrative court against right-wing mayor Robert Ménard if he does not remove his crib from the mairie’s entrance hall, as he refuses to do.

Mr Ménard says the crib is just “part of the cultural programme for the end of the year”, but the opponents denounce a breach of rules which say state bodies must not promote religion.

However he told Le Figaro that “when I had an opening ceremony for it, there were Muslims there, who found nothing wrong with it – am I also supposed to remove the ‘happy Christmas’ banners from the streets of Béziers?”

A 1905 law bans religious symbols from public buildings apart from churches and museums – crucifixes cannot be displayed, for example, however there has been a grey area over whether or not it applies to cribs.

The president of the Vendée council, Bruno Retailleau, told Le Journal du Dimanche he found the decision of the adminstrative court in Nantes “astounding” and he had received support from people of all faiths and none. He will be appealing the decision, he said.