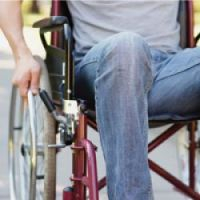 Can disability benefit give tax exemption?

MY WIFE and I are English. I am now 68. In 1993 I was moved to the Netherlands to work for the Dutch branch of a UK firm. In 1995 I was physically and neurologically injured in a work-related accident that left me permanently disabled. We moved to France in 1999.

I am allowed an exoneration from taxe d’habitation because of my disability. Despite taking court action,

I am not allowed one for the taxe foncière - apparently because I do not receive a French disability payment. My notaire thinks I may have grounds for action in the European Court of Human Rights.

Do you know of cases where people gained exoneration where their disability payment is from outside France? My Dutch disability pension stopped in 2008 when I reached 65 but I now receive a backdated UK Attendance Allowance and hope to obtain a carer’s one for my wife. A.W.

I am afraid that we are not aware of anyone having succeeded in receiving exemption from the taxe foncière due to receiving an overseas disability payment.

We are aware of some people who have managed to be reassessed under the French system, and thereby gain exemption but we understand the level of benefits is not always as high as foreign ones. It seems you have come up against the technicality of the law, as it is worded in such a manner that it is only French benefits that qualify in order to obtain the exemption.

Contacting your MEP could be one avenue for action.

Note also that the exemptions for the taxe d’habitation are different from the taxe foncière ones and, on condition of the income thresholds mentioned in the following answer, they include being aged over 60 and a general heading of being unable to provide for yourself through work due to disability. Why were we not asked to pay tax?

WE BOUGHT our French property in 2009. We have no income in France and do not submit a tax return.

We have never received a demand for taxe d’habitation and so have never paid this. We have paid taxe foncière so the Trésor Public is aware of our existence. I have assumed it is their responsibility to seek payment. What do you advise? My wife and I are over 70 and have no income in France although our UK income is quite substantial. E.B.

The taxe d’habitation is levie on the occupier of a property, whereas the taxe foncière is levied on the owner. Where these are the same person, he or she pays both.

They each take into account the ownership and occupation situation of the property on that January 1, even though assessments are not issued until around September.

As we explain in our helpguide to local taxes (available via our website for €5) it is possible to benefit from reductions or exonerations under certain circumstances though this does not apply if the home is a second home. French residents who are over-60 benefit from full exoneration if they have “modest means” (taxable income in 2011 of €15,376 for a couple), although I assume you are not resident as you say you make no income tax declaration in France.

Normally, information about new property owners is passed to the tax office by the notaire dealing with the transaction, or alternatively the seller, when they receive the assessment for the sold property, informs the tax authorities of the name of the new owner and they then reissue the assessment in the correct name.

However the general principle with taxation is that it is the responsibility of the taxpayer to ensure information is provided so the tax authorities can levy the relevant charges, otherwise interest and penalties may be due.

The Trésor Public is the banking arm of the tax authorities, but has nothing to do with the assessment of taxation, which is the responsibility of the Centre des Impôts.

Should I pay French inheritance duties?

I HAVE both American and French nationality. I live in the French overseas department Guyane Française. All my family live in the US and I will inherit a certain portion of my parents’ estate. Presumably estate taxes will be paid in the US but, after that, do I have a choice where I pay my income taxes? D.F.

As you are a French resident, you should already be declaring your world income to the French fiscal authorities and this will not change in the event of your parents dying should you remain in France.

However, as a general rule, the French reserve the right to assess you, the French resident beneficiary, on your inheritance. There is a credit that is given for any US tax that is paid, so essentially your liability is based on the fact that you are a French tax resident, irrespective of your nationality and anything to do with the deceased.

Sadly, this is increasingly typical of the French attitude with regard to foreigners: whether donor, beneficiary or asset has anything to do with France, France will levy taxation in the normal manner.

IF SHARE dividends are reinvested by a stockbroker and not banked, are they still considered as revenue and declarable in section 2 of the 2047 foreign income form. I declare them but friends say that they do not. A.J.

You are correct, dividends are income, irrespective of whether or not they are reinvested or taken, and so they should be declared as you state, and then in box 2DC on the main 2047 form.

You should also keep a record of these additions in the number of shares.

These acquisition costs will eventually be required to calculate any potential capital gain liability.

How are health policies taxed?

CAN you please advise me on rates of tax chargeable on complementary medical insurance and when it came into force? D.B.

Why was our income listed as being zero?

I WAS trying to find out whether or not we should be getting a discount on our property taxes - I thought the thresholds related to total income and that ours was too high, but I see our latest revenu fiscal de référence was zero euros - no wonder we received no taxe d’habitation demand last year. Can we claim back the tax paid in previous years? P.B.

The revenu fiscal de référence only includes French income, explaining why if you only have foreign income this figure is 0. Taxe d’habitation is only levied on those having incomes above certain amounts, linked to the revenue fiscal de référence, explaining why your liability to this tax is nil. With regard to claiming past taxes, you can only claim up to December 31 of the year following assessment i.e. 2012 to claim for overpayments made in 2011.

What is the threshold for claiming ASPA?

COULD you please tell me what the monthly income figure is for a couple to benefit from ASPA? G.C.

Total income from all sources should be under €14,479.10 for this pension top-up for senior citizens with low incomes. Search on our website with the term ASPA for previous articles on this benefit.