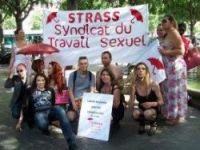 NEARLY 200 sex workers have taken to the streets in Paris to protest against "police repression" and plans to penalise clients.

The sex-workers' union Strass told journalists they wanted "our views to be taken into account when decisions concerning us are taken".

Morgane Merteuil, of Strass, said sex-workers were being repressed all the time - despite the fact that prostitution is not illegal in France.

She added: "Sex work is being repressed more and more even while support groups are pointing out that increasing repression is leading to poorer working conditions."

The prostitutes - who walked the streets from Place Pigalle to Châtele - say that new laws such as the ban on vans in the Bois de Boulogne in Paris and the proposal to penalise clients were pushing prostitutes towards working illegally with pimps and as part of illegal networks.

Earlier this year, François Hollande while presidential candidate had said that he would get rid of Nicolas Sarkozy's 2003 introduction of the offence of "passive soliciting" as it was "resulting in less access to care and social services for prostitutes".

For more on this: Prostitutes say plans dangerous
Photo: Strass page on Facebook

3 days ago
3
What are the new Covid rules in France from tomorrow?

22 hours ago
5
UK will walk away from Brexit talks: PM