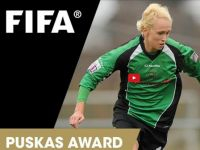 FRANCE-based footballer Stephanie Roche is the only woman in the running for this year’s FIFA goal of the year and is up against the likes of Zlatan Ibrahimovic, Robin van Persie and Diego Costa.

Irishwoman Stephanie, who plays for French Division 1 Féminine team ASPTT Albi and Ireland, is up for her neat three-touch stunner against Wexford Youths when playing for County Dublin amateur team Peamount United ... and many of her rivals are up for World Cup goals.

She told FIFA: “I am glad it was caught on camera. Most of our games aren’t filmed, so I was lucky enough that this one was. I think this will have been one of my better ones all right as I do like to try things from time to time, so it is up there.”

Stephanie – who earns the regulation €800 a month pay plus a flat at Albi - shows real class and skill that sees her up against Ibrahimovic, who won last year’s Puskas Award with a beauty against England in a Sweden friendly; Columbian James Rodriguez for his goal-of-the-World-Cup against Uruguay; Dutchman Robin van Persie’s flying World Cup header against Spain and Australian Tim Cahill’s World Cup goal against Holland.

Ibra, one of the highest-paid players in the game, is in again for his back-heel volley for PSG against Bastia.

Previous winners include Neymar and Cristiano Ronaldo but bookies have Irish women’s internationalist Roche at fourth favourite at 8-1 for a strike that saw her receive the ball with her back to the goal, flick it over the defender’s head and volley it into the net.

An internet campaign is mounting to get votes in for her goal, which has been viewed 3.5million times on YouTube. Votes cast by Monday will decide the final three best goals from the present 10, with the winner to be voted on by January 12.

Only six women have ever been nominated for the Puskas Award since it was started in 2009.