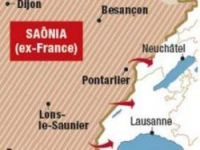 SWISS troops have taken part in a giant armoured defence exercise where the supposed “enemy” is a French army invading from Franche-Comté.

The exercise, codenamed Duplex-Barbara, imagined a scenario where economic pressures had seen France collapse and be broken up into several different regions, including warlike Saônia.

Swiss army chiefs imagined that the financial collapse would see troops from the eastern region try to attack Switzerland through Jura as the breakaway region of Saônia sent its Brigade Libre de Dijon to recover “money the Swiss had stolen”.

The commander of the Swiss armoured brigade that “defended” the attack, Daniel Berger, told journalists that the “exercise had absolutely nothing to do with the France of today”.

Last year Swiss forces also prepared for an invasion after the collapse of the Euro, preparing to deal with the chaos following an influx of refugees from the rest of Europe.

A week ago Switzerland voted by a large majority to keep their system of conscription and a civilian-based militia army. The Swiss Army has 155,000 troops and is one of the last countries to have retained compulsory military service.
Screengrab: Le Matin