Teenagers are paid to learn to fly 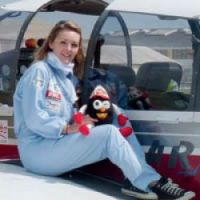 THE French have been fascinated by flight since the Montgolfier brothers started it all in 1783. Now the Fédération Française Aéronautique (FFA) is encouraging young people to learn to fly – and has a series of financial grants to help them.

FFA spokesman Cyril Godeaux said: “One of the unique things about France is that you can get your pilot’s licence before you’re allowed to drive a car!”

Youngsters can fly solo after the age of 15, and grants ensure that whatever a young person’s background, they can still learn to fly.

That helped Delphine Lacoste to discover a life and a career she could otherwise never have dreamed of.

Delphine, who tells her own story, right, said she had wanted to fly ever since she tried a flight at a local airfield at about 10 years old – but her parents were not involved in flying, so FAA aid was vital to get started.

The federation was set up in 1929 to support small aviation clubs, and promotes flying as a leisure activity and an interesting hobby for young people. It also advises clubs and lobbies on their behalf.

Mr Godeaux said: “The future is always with the upcoming generations, and that’s what we want to encourage.”

He added: “We fund flying lessons for youngsters from modest backgrounds to ensure flying in France isn’t only for the privileged.”

That is why the FAA helps cover the cost of lessons. If someone does all the exams and qualifies for all the grants, over the years they could get €2,175, paid directly to the flying clubs towards their lessons.

This is good news, as the average cost per hour of flying time is from €75 to €115, depending on the type of plane. Getting a Private Pilot’s Licence (PPL) requires a minimum 45 hours’ flying time, putting the price between €5-7,000 plus the cost of a club subscription and paying for a minimum of equipment (ie headphones) and paperwork.

The expense can be spread out over a year and, with the various grants, can mean someone under 21 can get their PPL for about €1,600, a sum which the FFA compares with what a smoker might spend on cigarettes for a year.

A PPL allows the holder to fly single engine planes and to take passengers, but not on a commercial basis. Passengers are allowed to share the costs of the flight with the pilot, but that is all.

For France’s youngest pilot, Perpignan-based 17-year-old Cédric Rousseau, that means he can fly a single-engined plane anywhere in Europe, because he also speaks English, the language of the air.

Cédric passed his theory exam, the Brevet d’Initiation Aéronautique at 15, so he could take flying lessons in a dual control plane, and passed his first flying exams a year later.

After 35 hours of flying in a dual control plane, including five hours of no visibility, plus 23 hours of solo flight, Cédric received his PPL.

Like everyone else, he must renew his licence every two years, either by doing another test or by completing 12 flights, one of which must be with an instructor and lasting at least an hour.

The FFA has 600 aviation clubs and says that wherever you are, there is a club within 40km.

Find out more at www.ff-aero.fr