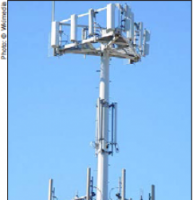 FRANCE must triple the number of mobile phone masts in order to reduce the amount of radiowaves they produce, according to a survey.

The report by a committee called COPIC, which grouped together civil servants, local politicians, regional associations and telephone operators, said that in order to reduce the power of antennas, their number would need to be tripled or even quadrupled in some areas to continue to provide constant coverage.

The group was set up to examine concerns over mobile phone masts raised during the 2009 ‘Grenelle des ondes’ (discussion on radiowaves).
Between 2010-11 it carried out experiments in 16 zones in different parts of the country, simulating the effects of reducing antenna power to a level of 0.6 volts per metre – a level demanded by the anti-antenna group Robin des Toits.

The report says that 90% of exposure to the electromagnetic fields produced by the antennas was below the level of 0.7v/m.
It adds that in reducing the power of antennas to the level demanded by protestors, there was “a strong deterioration in network coverage, particularly inside buildings”.
The report cites an 82% drop in coverage inside buildings in Paris at this level.

The Fédération Française des Télécoms (FFT), a group of telecom operators said the idea of installing a further 110,000 antennas in the country was unreasonable, especially as the 0.6v/m level “was not recommended by any agency with expertise”.

The Ecology Ministry has called for “reflection” on the issue.