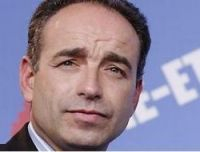 THE LEADER of France’s main opposition party, the UMP is to quit after the long-running ‘Bygmalion Affair’ reached a head.

Jean-François Copé will stand down as party president on June 15, after more revelations emerged over the multi-million euro campaign spending scandal over the funding of former President Nicolas Sarkozy’s 2012 election campaign, which has embroiled the party for months.

His entire leadership team has also stood down, it has been reported.

His announcement came after a heated meeting that had been initially arranged to discuss the UMP’s defeat in in Sunday’s European elections to the Front National.

But the so-called Bygmalion Affair overtook the party - and Mr Copé, who had previously claimed he had no knowledge of the spending scandal, was left with no choice but to resign after a challenge from long-term rival François Fillon.

He said that had not spoken to either Mr Copé or Mr Sarkozy about the falsified invoices, which he described as “anomalies”.

Mr Lavrilleux’s confession came hours after lawyer for communications agency Bygmalion, Patrick Maisonneuve, told reporters that the agency had been warned by UMP leaders that it would not be paid for genuine campaign work unless it created false invoices amounting to €10million.

While the lawyer was speaking to the press, anti-corruption police seized documents at UMP headquarters in Paris, and at Bygmalion’s offices.

Last year, France's constitutional court upheld a verdict that the UMP had broken spending limits for its 2012 election, meaning it lost its €11million deposit.