Vegan mother has baby taken away 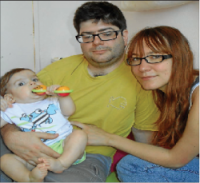 A VEGAN mother has had her six-monthold son taken away and put into care after a doctor declared him to be suffering from “severe malnutrition” and told the legal
authorities that the child was in danger as the parents were starving him.

Since baby Joachim was taken away from the family’s home in Lauris, in Luberon, on a judge’s orders, Céline Legros, 24, has only been allowed to see him for eight hours a week at a nursery in Avignon run by the Direction Départementale des Affaires Sanitaires et Sociales.

Céline said: “They took our baby to Avignon, 40 miles away. I was shocked and bewildered. The most humiliating thing is that I have to be under surveillance when I see Joachim. Being without your baby for six months is hard.”

She said that the nightmare for her and fiancé, Julien Paul, 28, started when Joachim was five months old and she thought he was underweight so took him to the doctor in Cadenet in Vaucluse.

Céline mentioned her vegan diet to the doctor, who prescribed Joachim homeopathic
medicine for infants with digestive problems and set a follow-up appointment.

“I left feeling reassured,” said Céline. But the doctor also alerted the Public Prosecutor in Avignon and expressed concerns that Joachim was suffering from malnutrition.

Acting on the doctor’s advice that Joachim had vitamin deficiency, the couple took him to the child unit at Timone Hospital in Marseille for tests.

There, a paediatric specialist questioned Céline about her vegan diet and Joachim underwent tests. The results were normal and showed no signs of malnutrition.

But the doctors’ report described Céline and Julien-Paul as “unstable” and alleged they had starved Joachim and undermined his health.

Céline said: “I was placed in custody for 24 hours and my vegan diet became the focus of attention. Our home was searched and police asked me if I only ate tofu – even though I fed Joachim with milk bought from a pharmacy.

“I was put under contrôle judciaire and treated in the same manner as a paedophile or rapist.”

She said Joachim had been breastfed but had an intolerance to cow’s milk and she had given him formula milk from a pharmacy made from vegetable protein. This formula conformed to standards set by food safety agency Anses.

Patrick Gontard, lawyer for Vaucluse Conseil Général, said: “The child was only being given three bottle feeds a day and was suffering from malnutrition and in danger.”

Dr Jérôme Bernard-Pellet, a nutritionist specialising in vegetarianism, said three feeds were insufficient, but added that Joachim may have not been feeding due to a temporary eating problem.
The medical report also said that the parents had refused a scan, but Céline said: “All we asked for was for help and for explanations.”

Despite the reservations of a physician and paediatric specialist, a doctor then ordered that Joachim be taken to a nursery run by the department council.

Céline said: “Joachim has to stay in the nursery there for at least six months in accordance with a judge’s instructions.
Worst of all, we are only allowed to see him for eight hours every week.
“He has gone from a happy smiling baby to one that is quiet and withdrawn.
“It is legal kidnapping.”

But Mr Gontard said: “There is nothing in this medical dossier against vegans and the mother’s lifestyle. The legal procedure was applied because the child’s health was in a critical condition.
The judge believed the baby was being exposed to real risk.”

Emmanuel Ludot, the family lawyer, said: “There was nothing in the medical analysis to show that Joachim was suffering from malnutrition. The mother is a vegan and the judicial authorities believe veganism is a sect. Céline and Jean-Paul are devoted and loving parents. But now the legal process has been set in motion.”

The couple have started a campaign to bring home Joachim, who is now eight months old, and have held demonstrations outside Timone Hospital in Marseille and written a blog about their ordeal.

An appeal court hearing is due to take place on October 24 in Nîmes.