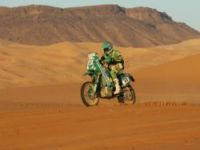 By Louise Butler
THE DEATH of French motorcycle rider Pascal Terry whose body was found after a three-day search during this year’s Dakar Rally highlighted the dangers faced by competitors.

Terry’s situation, disappearing after running out of fuel during the off-road rally, was also experienced by former competitor Gilles Algay from Cahors - who now teaches children to ride in the Lot. He spoke to Connexion about his experiences.

This year’s winner Giniel de Villiers described the rally which crossed Argentina and Chile and finished on January 18, as the toughest race ever.

Security fears prompted officials to cancel last year's event and move the off-road motor race away from its traditional Europe-Africa route for the 2009 competition.

A total of 51 people have died in connection with the rally which sees three classes of vehicle competing: cars, motorbikes and trucks.

The race originally set off from Paris and is dominated by French competitors.

Mr Algay from Cahors has competed in the Dakar six times (finishing 15th in 2006), eleven times in the World Enduro Championships (coming first as part of the team event in 2001), and won second place in the Enduro Championship of France in 1998.

Algay is married to Sandrine, and has two children, a five year old boy named Hugo and a new baby girl, Fanny. At 39, he has taken a break from top-level competitions but bikes are still a substantial part of his life.

You have made it to the finish line in six Dakar Rallies and have been in the top twenty in three of them. That's an impressive record in the world's toughest off-road endurance race. What is your secret?
I guess it is pretty rare never to have retired from the race. I would say that my secret is that I don't go out too hard. I take it easy and ride with my head.

What kind of preparation and costs are involved in participating in the Dakar Rally?
Physically, I have never prepared specifically for the Dakar as I have always kept myself race-fit throughout the year, eating a good sports diet and competing regularly. It has cost €50,000 each time I have participated in the race, the money being obtained through sponsorship, fund-raising events and some help from the Lot department.
There has even been a Gilles Algay wine produced by a local vineyard to help out.

Could you describe your best and worst moments when competing?
The best moment for me was arriving in Dakar in 26th place in my first rally in 2002. I was elated, particularly as I had achieved it with a broken shoulder from an accident I had just three weeks before the start of the race.

The worst moment was the death of my friend and fellow rider Eric Aubijoux on the penultimate day of the 2007 race. The feeling when another competitor dies is awful. We know the risks but still find it hard to believe it can happen to us.

I understand that in 2005, your chances of a high placing were scuppered by a fuel problem?
I was in a fantastic position, around 12th place overall, and was just 30km from the end of a stage in the dunes when my petrol ran out. As the sun went down, passing riders gave me all the fuel they could spare, but it wasn't quite enough.

I had no choice but to spend a frightening night alone in the desert. I lay there for hours desperately waiting for daylight and the arrival of my support team. It's at such times that you need to be really strong mentally. I ended up in 45th place, my worst ever Dakar result.

What is the atmosphere like between competitors?
Great, particularly among the bikers. There is a great deal of mutual respect and understanding and we will always come to the aid of our fellow competitors. We will often form into small groups during the race stages - safety in numbers.

These are often people we have never met before, but after the racing day is over we seek each other out for a chat, regardless of nationality or language barriers.

Critics of the rally say it is a race for spoilt rich kids who have no respect for the people whose countries they hurtle through. What would your answer be to such a view?
I would say that I am the answer. I am not rich and I have earned my position through hard work, dedication and years of competing at the highest level. There are many competitors who come back to Africa after the race is over in order to forge bonds with local communities.

I personally have been involved in providing Mauritanian schools with much-needed materials such as writing books. Spending time with the local schoolchildren has been a real highlight for me. I was even invited to a Mauritanian wedding, but unfortunately could not make it.

The 2008 rally was cancelled after terrorists threatened to target competitors in Mauritania. Did you ever experience any hostility in the country and do you think the Dakar Rally in Africa is finished?
I have always experienced exceptional warmth and hospitality from the Mauritanians. I believe that once the problems have been resolved, the race will return to its historic home. For me, the magic of the Dakar Rally is Africa.

At what age did you start riding and what support have you received from family during your career?
My cousin, Jean-Marc Rhodes, gave me my first lesson at eleven years old and my first competition was at thirteen. It was a fantastic when Jean-Marc competed alongside me for the first time in the 2007 Dakar Rally. My sister and wife also ride enduro bikes, so although my family worry when I take part in what is undoubtedly a risky sport, they also have a deeper understanding of my desire to compete than perhaps a non-riding family would.

What are you doing now? Have you now retired from competition in order to take up a safer sport?
Right now I am concentrating my efforts on managing two riders at Team HM Honda, which is incredibly rewarding.

I am also involved with bikes in my full-time job, which is as an instructor of enduro bike riding to children at the Cyclo Moto Lot centre near Cahors. We run courses for children aged between six and seventeen, including summer residential schools. In contrast to my life as a competitor, the emphasis of my work is on safety, security and responsibility in riding.

The kids are taught to respect other users of the road and countryside and to take care of the bikes we provide them with, in addition to learning the Code de la Route and first aid.
I am most definitely not teaching them to race. I am so lucky to be able to work in a field I am passionate about. It's a dream job.

There has been some debate over a possible ban on motorised vehicles using the hills and tracks of the region after complaints by ramblers. Do you believe such a ban could become a reality?
I appreciate that some people are upset by the noise of bikes, but I don't believe there will be a ban. Local decision makers recognise the importance of the sport in the region, and know that the vast majority of riders are respectful and responsible in their use of the countryside.

Myself and fellow riders always slow down for walkers and often engage them in conversation in order to foster good relations and mutual understanding.

Finally, are your days of competition really over?
Well, maybe I'll give just one more Dakar Rally some thought…