Europe loves Asterix but can he conquer the US? 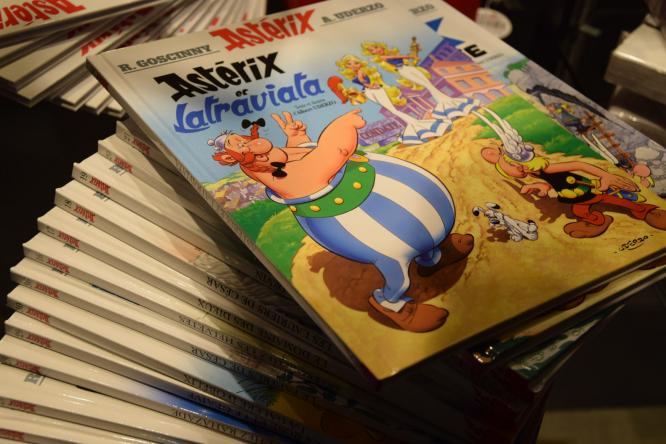 Prof Gabilliet said the UK is in around fourth or fifth place for European Asterix sales Pic: matteo_it / Shutterstock

Asterix books have been a huge hit in France since the character was launched in 1959, and this shows no signs of slowing down, despite the deaths of his creators.

The latest comic book by the official successors of Albert Uderzo and René Goscinny came out with a five million print run last month.

The books are also popular in many parts of Europe.

Far from a household name in America

In America, however, after several attempts, Asterix is still far from a household name – although US publisher Papercutz said a 2020 relaunch with new translations “has gone well despite the pandemic getting in the way”. No sales figures are available.

Owner Terry Nantier said they had tried to address some ‘caricatural’ racial depictions by inserting boxes explaining the context and attitudes of the time the books were written. Netflix is also preparing to release an animated Asterix series in 2023.

The books are about the adventures, in around 50BC, of a Gaulish warrior and his friends as their Breton village holds out against the Romans, aided by a magic potion brewed by their druid.

Paul Gabilliet, professor of North American civilisation at Bordeaux Montaigne University, said: “There are very French reasons why Asterix was an enormous success here, including a long history of teaching about the Gauls in schools, plus the fact that when the character was created, almost everyone did some Latin at school. But in reality, when we look at the big picture, we see that it is a great European comic book.

“One proof is that the books have always had monumental success among German speakers, next after French speakers, and just after that come the Spanish and Italians.

'Ancient Gaul and Roman history still strike a chord for a European audience – much less so, or not at all, with an American public'

"The Americans succeeded in selling to the world one of their own founding myths – the western – but it has been much harder to sell this one to them.”

Prof Gabilliet said the UK is in around fourth or fifth place for European sales.

“It confirms my hypothesis that the British are Europeans without being European, which is quite clear in recent times. There’s a certain level of popularity, but it’s not at the levels we see in France and Germany.

“American superheroes are more appreciated there than Asterix.

“Even so, despite Brexit, there still remains a dose of European culture in the British culture, and that’s normal.”

Prof Gabilliet said the “extraordinary” translations and clever wordplay of the late Anthea Bell had helped.

However, they were so well adapted to the British audience that they went over less well in America (for example, she named two Roman soldiers Sendervictorius and Appianglorius).

“Like with metropolitan or Quebecois French, British English creates a cultural barrier for Americans.

'Asterix didn’t fit the mould in America at the start of the 1980s. It was before the graphic novel had caught on'

“At the start of the 1980s, the Dargaud publishing house proposed translations for the US audience, with slangy American expressions. It didn’t work, partly because the albums were sold in a similar format to the French ones, and at the time it wasn’t familiar to the Americans. They were used to their little stapled comic books, usually featuring young characters or superheroes, and Asterix didn’t fit the mould. It was before the graphic novel had caught on, as it later did.

“As for the new Papercutz ones, Asterix was nowhere to be seen in the top 750 comic book and graphic novel sales for the US in 2020, so I don’t think the figures can be as good as all that, but it’s normal: we can’t transform Asterix into a US bestseller overnight.

“I don’t know what the Netflix show will be like either, but you never know. If it’s well-financed and well-adapted, with ideas that appeal to the Americans, maybe it will boost the sales of Papercutz’ books. I’m curious to see what impact it will have.

Prof Gabilliet said it was “a bit regrettable” that Papercutz had found it necessary to ‘contextualise’ depictions of race but “it’s a sign of the times”.

He did not think Asterix was especially problematic from this point of view, though some cultural references are now harder to follow for young readers, such as dated caricatures of the Germans in Asterix and the Goths.

“Similarly, with Asterix in Britain, I’m not sure if the average French person still thinks the Brits have afternoon tea every day.”

The latest book has a five million print run

The latest outing for Asterix and friends, in the fifth comic book by ‘new’ Asterix team Jean-Yves Ferri and Didier Conrad, sees the plucky little Gaul on his travels again, this time to visit the Sarmatians, a nomadic people from the steppes.

Asterix and the Griffin has a five million worldwide first print run and was released in France and the UK last month. It will be released in the US next month.

Missions Locales: Unemployed youngsters in France thrown a lifeline
2 December 2021
More from Comment
More from Connexion
Get news, views and information from France
Join the newsletter
Subscribe to The Connexion