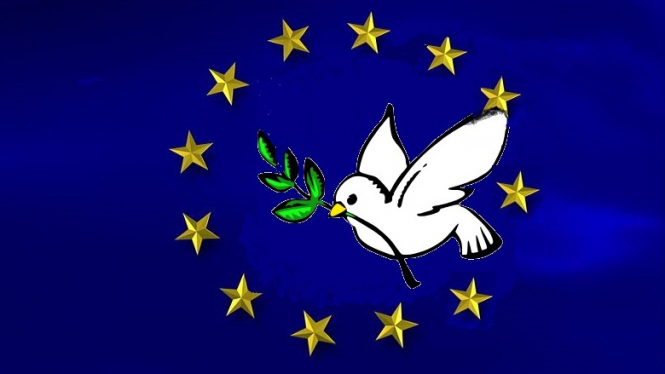 How can we ensure that we never reproduce the series of events in January 1933 that led to a boastful, mendacious populist with a minority of seats in parliament to take over a civilized country and provoke a world war?

We can start by getting something clear.

Both world wars were caused by a clash of nation states that were driven by rivalry and resentment but unable to resolve their differences without deploying armies.

The nation state has some fine qualities but its violent tendencies need to be restrained by binding international agreements to which all parties are committed.

The EU is one such form of agreement. Unless you subscribe to the super-state-in-the-making-theory (for which there is no hard evidence), or believe that the UK should isolate itself from the rest of Europe in order to come to its rescue as in 1944 (a misreading of history), your best bet for peace is to keep countries talking to each other in a forum of equals.

You could say that belief in the flawed and bumbling institutions of the EU are the price we have to pay not to live through another war.

The facts speak for themselves. In the 75 years from 1870 to 1945 there were three great episodes of fratricidal bloodletting, not counting civil wars. In the 73 years since 1945 there have been no international wars in Europe.

Brexit stalwarts say this period of peace during the EU’s time in office is a coincidence not a correlation. War has been absent for other reasons. The existence of Nato, for instance; but Nato is a military alliance that does not do political and civilian conflict resolution.

Supporters of Brexit often fail to see that the union of European states functions on more than one level. Far beneath the “self-serving” eurocrats of Brussels, ordinary citizens regard it as being in their mutual interest to forge horizontal links across frontiers. This is particularly true of the Germans and the French.

If you hold the romantic notion that war is not that bad or that Great Britain emerged heroically after the last global conflict, you have not talked to ordinary, continental Europeans who lived through it. They know that almost any price short of loss of self-respect is worth paying to keep the peace and that the British were lucky to recruit their American cousins to the cause.

Peace should be our priority. Always and forever. It is the prerequisite of all that you enjoy in life, including and especially your freedom to move where you want and do what you want.

The cost of EU membership is small beer in return for the assurance that your children will not turn 18 and be sent to die by foolish old men in uniforms.

Do I have to spell this out in hard currency? The Second World War cost the UK £1,000 billion at today’s prices (give or take). It curtailed 512,000 British and Commonwealth lives (military and civilian); many of them for no strategic gain. It spelled the end of the British Empire and, as Churchill suddenly realized at the Teheran Conference in 1943, the war relegated the great nation of Britain to the international second division.

The UK’s net contribution to EU budget per year has been just under £9 billion. Which means we can buy 111 years of safety for the same cost as fighting another war.

All other considerations apart, we should never underestimate the EU’s role in keeping the peace and we should all regard it as our duty to be actively involved in promoting international harmony.

If there’s a better insurance policy on the market, I am waiting for some Brexiter to tell me about it.