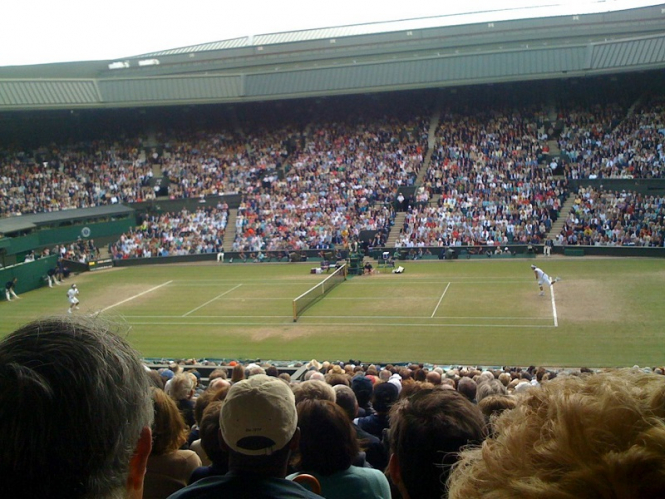 This was particularly the case in early June, when I attended a magnificent party to celebrate Queen Elizabeth II’s official birthday.

All were terrific advertisements for what the French call “Anglo Saxon” culture, but it was still the manicured grass that made me think most fondly about England.

The grass is meticulously maintained at 8mm high, and it is easily the most beautiful place for a game of tennis in Paris.

“Wimbledon-sur-Seine” is officially on UK soil – and it contrasts markedly with the workaday red clay courts at Roland Garros, a few miles away from the Embassy.

The home of the French Open, which ended just before this year’s Embassy garden party, is impressively functional. I have attended outstanding Grand Slam matches there.

The slow playing surface is demanding, making for captivating action. But as far as charm and character are concerned, forget it.

Wimbledon is not only the most prestigious tennis tournament in the world, but a byword for timeless class and sophistication. The grass courts at the All England Club in southwest London have been jewels in the crown of British sport since Queen Victoria’s reign.

The courts are maintained by strict precision. Consistent ball bounce is helped by the use of 100% perennial rye grass. Ground staff cut it by a millimetre a week from winter, and mow it every morning during the tournament.

Beyond Wimbledon regulations related to the grass, there are plenty of idiosyncracies that could only have been thought up in England.

Players have to wear all white, and this includes any underwear that might appear during a rally. Even Roger Federer – the eight-time Wimbledon champion – had to remove his orange-soled Nikes following a complaint by officials.

Ball boys and girls are not allowed to chat in between games.

French school children learn about Wimbledon in the same way that they study the Monarchy.

They soon realise that there are strong links between the two. Everyone has to bow or curtsy to the Queen or her son and heir, Prince Charles, when they turn up in their designated box at Wimbledon, for example.

This rule used to apply to all Royals, including minor ones, until 2003, but is now pretty academic: Her Majesty did not appear for 33 years before 2010, and then retired as patron of the tournament in 2016. The Prince of Wales isn’t interested either.

More positively, The Duchess of Cambridge, is now patron and a regular attendee. Other young royals who like the game include Kate’s husband, Prince William. P

eople do sometimes curtsy and bow to them, but only out of convention, rather than because of any particular Wimbledon rules.

Other conventions ensure the consumption of thousands of strawberries and gallons of cream during Wimbledon fortnight. It is a time when the weather becomes even more of a talking point than it usually is in the British Isles.

Any hint of rain creates a melodramatic panic, even though there are retractable court roofs nowadays.

It is this sense of eccentric theatre that sets Wimbledon apart from its rivals. As with so many elements of English life, the manner in which a game is played is often far more important than the game itself.

Nabila Ramdani is an award-winning French-Algerian journalist who specialises in French politics and the Arab world. Her articles feature in the French national press as well as internationally. She is a regular columnist in The Connexion