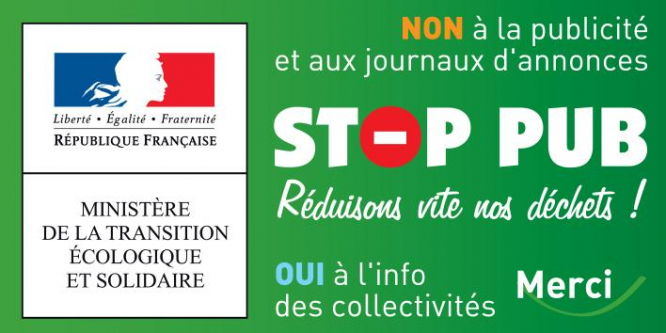 Supermarket publicity material has been in the news again, as reported in August's Connexion, thanks to retiree Pierre Grandperin, who for a year collected all the leaflets and brochures delivered to his home.

As this weighed in at 28.4kg, it served to spotlight the environmental issues surrounding an aspect of everyday life in France. When visiting on holiday, in the days before we moved here permanently, I was often intrigued by those hand-written signs on doors and letter boxes saying "pas de pub".

I used to wonder, do people really think that this ordinary house might be a pub, or are thirsty travellers so desperate for a drink that they don't look too closely before trying to get inside? Are the householders fed up with requests for a pint of lager and a packet of crisps (or the French equivalent)? It wasn't until we moved here that I realized that the notices were short for "pas de publicité" ("no publicity") and were actually an instruction to post office employees, whose job it is to deliver not only the usual post, but also publicity material.

This is a barely adequate description of the weekly deluge of leaflets, pamphlets and small booklets which are issued by local supermarkets and other traders, as Mr Grandperin has highlighted. If you do not put up a notice preventing its delivery, your letter box will be half-filled once a week.

This is certainly one of the small but significant differences between everyday life in France and in the UK, where you might receive one or two leaflets a week. Sainsbury's and Tesco's are energetic competitors but apparently do not see an advantage in bombarding households with multi-page brochures. It might be different in other areas, but where we live is about 15 miles from three different towns, and in the one place where their catchment areas overlap. As a result we receive publicity from every supermarket imaginable and furthermore, as each town has a large Super U, three from that particular store. It is fair to say that the bundle will also include the occasional official information leaflet or magazine, but 99% of it will be publicity material.

The sheer volume of paper is astonishing, and surely does not fit well with government attempts to cut waste. There are laws to prevent out of date food being destroyed, as something like 700,000 tonnes of food is thrown away by shops in France every year. Similarly in 2016 a law was passed to restrict the use of lightweight plastic bags for shopping, and extended in January 2017 to cover packaging bags for fruit and vegetables, unless they are made of biodegradable materials.

The environmental issues surrounding publicity literature have been recognised at an official level. In December 2016 the government tried to breathe new life into the "Stop pub" campaign, which had been introduced as long ago as 1999 but had had little take-up. The government's belated interest in the issue was in response to figures which showed that in 2015 each household received 30 kilos of unsolicited publicity, a grand total of 800,000 tonnes, so Mr Grandperin should not have been surprised. There is a fine of €450 for ignoring a "pas de pub" notice and presumably the idea behind the emphasis on encouraging people to refuse publicity material is that the quantity of printing will reduce as the demand decreases.

The campaign seems to have had limited impact, however. The latest figures estimate that only 17% of households use one of the "Stop pub" stickers, which were first made available in 2004. So after 18 years of campaigning, and 13 years of stickers being distributed, more than four out of five households are still inclined to receive their weekly bundle of publicity.
Despite these efforts, the government must take some of the blame for the current state of affairs. Regulations governing television commercials used to be so restrictive and confusing that supermarkets were not able to advertise freely until 2007 and so were forced to devise alternative strategies.

The government's aim seemed to be to protect the advertising revenue of the local press, but the law of unintended consequences meant that the large supermarket chains spent their advertising budgets on publicity material instead. As a result, La Poste was the beneficiary rather than local newspapers, so perhaps that could be seen as a happy, if unexpected, outcome. Certainly the production of publicity material seems to have taken on a life of its own and its delivery must account for a significant source of income for La Poste and so help to preserve those village post offices which are becoming so rare in the UK.

In response to Mr Grandperin's complaint, Alain Bazot, president of the consumer group UFC-Que-Choisir, suggested most people would object to paying €200 a year on top of their food bill just to fund the production of this sort of material. True enough, but this ignores the fact that supermarkets are always going to have an advertising budget and spend that money somewhere. It is really an environmental problem rather than an economic issue, as those 30kg of paper are destined for the tip.

But this still begs the question why so many people continue to accept this material when it would be simple to stop it arriving. It has its benefits, of course. Sometimes a special offer will catch the eye, especially those for wine and spirits in our household, if the truth be known. Occasionally an interesting recipe will be printed to explain the use of some of the more exotic food items. For those of us who are non-native French, pithy phrases used as exhortations to buy are useful for improving a grasp of colloquial vocabulary. And, much of it is useful for lighting the fire. Not, however, the glossy leaflets which not only take an age to get going but also emit a rather worrying purple glow, suggestive either of sorcery or something horribly toxic. But these are minor benefits compared to the environmental costs and the inconvenience of having a letter box filled with paper. Even the tempting "special offers" can be misleading. A remarkably cheap camera? The store probably has three to sell and they will be gone within 20 minutes of the doors opening on the first day of the offer period.

I suspect that for many people the weekly arrival of publicity leaflets is a guilty pleasure. There is something soothing about sitting down with a cup of tea and browsing through the different pamphlets, a little like window shopping but in the comfort and privacy of one's own home. But how many, I wonder, would admit it?

You can download an official "Stop Pub" notice by clicking here