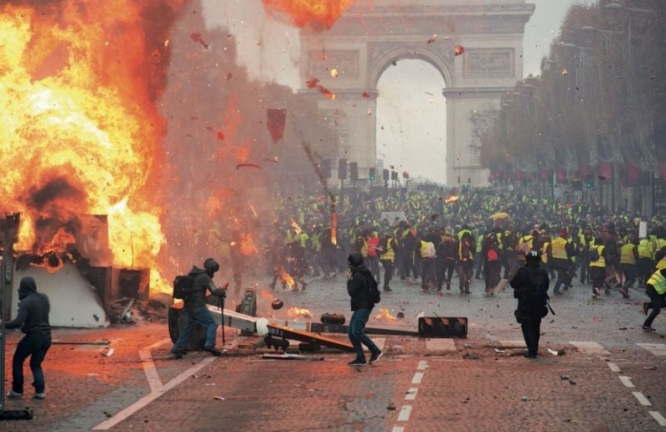 It is easy to back up weak claims with unlikely figures but there has never been much doubt about those suggesting France is the most popular tourist destination in the world.

Last year was yet another record for the number of foreigners enjoying a country associated with everything from spectacular beaches and snow-capped mountains to high-culture and a fascinating history.

Close to 80% of France is countryside and cities such as Paris and Nice are romanticised everywhere.

America – with a population of more than 300 million – is one of those places where almost everybody is intrigued by the City of Light and wants to go there at some point.

Methods of counting visitor numbers are often disputed – they range from algorithms calculating nights spent in hotels and hostels, to those pouring in at airports, and railway and coach stations. But France’s figures are seldom challenged, because it is so obviously a must-see.

You would think Britain would win hands down as a Royalty destination, for example, yet more people are attracted to treasures such as the Palace of Versailles – the ancient home of the Kings and Queens of France west of Paris – than they are to residences in the UK still used by a living monarch and her sizeable family.

France is lucky in that it generally avoids the ‘wrong kind of tourists’, too. The high price of alcohol in the capital and on the Riviera certainly keeps away the kind of rowdy boozers who have despoiled large parts of southern Spain.

Despite all this, the French government has just announced that a bid to attract 100 million visitors a year to the country by 2020 is set to fail.

The ambitious target was first announced five years ago by the then-President François Hollande, with everybody believing it was easily obtainable.

What they did not count on were two highly significant developments on both sides of the English Channel – the success of the gilets jaunes in France and Britain voting for Brexit.

The damage the gilets jaunes have done is self-evident. The political movement was set up at the end of 2018 to campaign for lower petrol prices and was almost immediately successful. Anybody could pick up a bright fluorescent jacket – the kind sold in DIY stores for those who want to be seen by the side of a road – and start calling for the government to resign.

The gilets jaunes riots in Paris that followed were astonishing – millions of pounds of destruction was caused on the Champs-Elysées and surrounding streets, as other prime tourist attractions such as the Arc de Triomphe were ransacked.

Beyond the cost of repairs, the optics were quite terrifying: flames and thick black smoke swirling skywards next to the Eiffel Tower summed up the disaster. So did the mass use of tear gas, a chemical weapon that was deployed indiscriminately on anyone caught up in the violence.

In turn, the prospect of Brexit appears to have spooked the British – the biggest visitor group to Paris, as well as departments such as the Dordogne.

More than three years of torturous negotiations have meant a falling pound, a fear about further economic instability, and a general feeling that France might not be such a welcoming place anymore for those who want to quit the European Union and go it alone.

Yes, around 90 million people a year are still travelling to France, and the golden 100 million figure may well be reached by the time of the Olympic Games in Paris in 2024, but popularity is not eternal. It is certainly not guaranteed.

There were just under 38 million foreign visitors to the UK in 2018, but with more street mayhem in France, and an end to the Brexit impasse, who knows: perhaps Britain will be picking up the tourist gold medal itself one day?