Never give up! Enjoy life after work 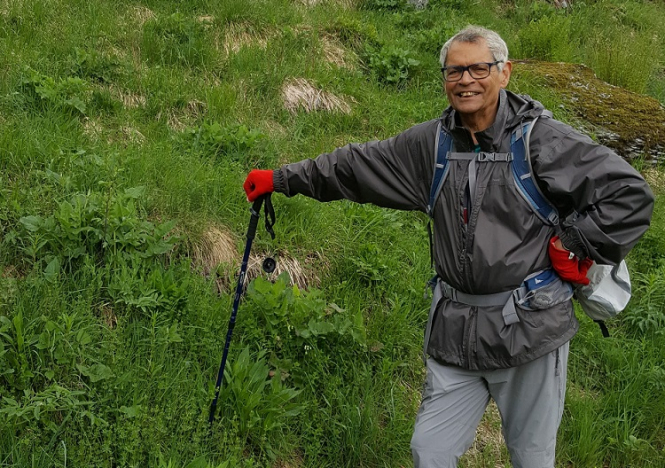 Instead of falling on the Metro stairs in Paris, I was now being trapped by tree roots in the forest ‘ says Christopher Vanier
By Connexion journalist

I thought my retirement would be a quiet affair with my wife in Paris – but it has ended up with me buying a house with someone different and spending hours every week running around a forest (sometimes in the dark).

Here in France, retirement comes soon after age 60, earlier than in many other countries, and many of us look forward to it eagerly. No more getting up early on Monday mornings! No more bosses to satisfy with hard work! Eternal holidays! Well, perhaps not eternal, but to take when we like. Freedom!

Then we check our pension plans and try to live a peaceful senior’s future as anticipated. For example, I always thought that the only point of being in France for a Brit like me was to live in Paris. Quietly.

But for many of us, that dream of a quiet retirement becomes a chaotic moment, a time of uncertainty and trial.

At work, we were surrounded by friends and acquaintances.

Now, we have few people to talk to. And, awkwardly, children and grandchildren live their lives elsewhere. It’s not always easy, but we must find new objectives. In my case, instead of computer technology work, I preferred to read, write, and make writer friends.

But my wife died three years after I retired. She had primed me for this loss, and made me promise to find another partner. So I did. Then, suddenly, Paris and its memories had no more meaning.

With trepidation, we did what many retirees find themselves doing, and fled the capital for a peaceful nearby town, in our case Fontainebleau-Avon.

The unpolluted air and the forest were our objective, and as soon as we set foot there, our lungs and hearts rejoiced.

With this beginning, we kept on looking upwards, opening up to new activities rather than submitting to age.

We chose easy access to transport, commerce, and medical facilities. We looked around for other retired and active people. I accepted some gardening, which I had never imagined before in my previous Paris apartment life, and discovered that mowing a lawn can be fun.

And what about health? We entered a sporting community to do forest hiking, swimming, and other sports, but I found my balance had deteriorated with age. Instead of falling on the Metro stairs in Paris, I was now being trapped by tree roots in the forest.

Never give up! With some kinesitherapy and internet research, I found daily gymnastics helped and, as a bonus, my lower back problems vanished. To my surprise, my club chose me as chief trainer for its table tennis players.

This was the moment to look back at past sporting activities. Twenty years earlier, I had run marathons. But work and the large training investment had put paid to all that. I was an ex-runner.

Now, in retirement, I discovered the Fontainebleau Park, nearly four kilometres in perimeter. Of course, I couldn’t go back to marathons, but why not 10K races? Five-minute kilometres were lost in the past, but six minutes, ah, a retiree of 70-plus years might well be able to do that.

Another challenge for retirees like us: how to control our weight with a proper diet. French food is good.

Little by little, we cut out most of the sugary desserts, red meat, and industrial starches. These were replaced by vegetables, fish, eggs, cereals, and dairy products.

And not more than one glass of red wine per day. Then our doctors helped us to include the right vitamin supplements, such as D3 and others. With not much sun and the effects of age, these were essential.

Even the enlarging prostate difficulties could be controlled.

While we are keeping the retiree’s body in shape, let’s not ignore the mind.

At our age, our heads are so full of stuff we don’t want to store much more. We forget names, dates, numbers, even actions.

Fortunately, as I learned, we can avoid some losses by simple techniques, such as always leaving your mobile phone in the same place, or repeating to yourself as you leave the house: “I’ve just locked the door.”

Would this be the end of retirement problems? Far from it! Over the years, my new wife and I had to come to the aid of our younger generations.

It hadn’t always been that way.

My parents had taken in my grandparents for the last 10 years of their lives, and I had done the same with my mother. But we found our children needed financing and encouragement in life, not the other way round. Provided we didn’t interfere too much, our help seemed to work.

What’s missing for us retirees over 70 to be positive about? It’s coming to terms with the past and the future.

We need to reflect on our lives before retirement, noting the things we could have done better, but above all being thankful for what went well.

Family albums are useful, as are writing things down and talking to children and grandchildren. This reflection helps soothe death anxiety. We will die in the coming years but don’t have to be fearful. We can continue being active and learn all the way.

Christopher Vanier has written a book of  memoirs about his efforts to embrace retirement, On the Run in Fontainebleau: Jogging Through Retirement, available through Amazon and at the Fontainebleau English bookshop Reel Books.