Should May 1968 be commemorated? 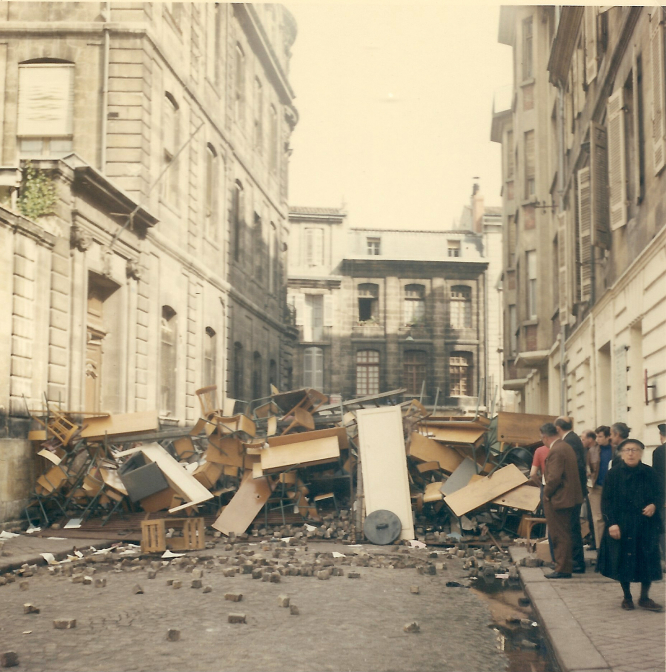 The aftermath of a riot in Bordeaux as the protests spread nationwide, © Tangopaso
By

At the beginning of May 1968, mass strikes, protests and street battles ground France to a halt. Fearing all-out civil war, the then President Charles de Gaulle secretly fled to a military air base in Germany and called snap parliamentary elections on his return.

It was very nearly a revolution but by June it had fizzled out. However, that short period is still widely discussed today and the big question is, should it be commemorated this May, 50 years on, and, if so, how...

What was it all about?

The answer depends on your point of view. If your politics veer to the right, you may describe what happened as the évènements, or events, of May 1968, as if being any more specific is distasteful or dangerous.

If they tend towards the left, it becomes the more positive and ideologically charged mouvement, or movement, of May 1968.

It started with demonstrations, led by student Daniel Cohn-Bendit at Nanterre University, to the west of Paris, about parietal rules which determined where men and women could sleep. The dispute between the students and the authorities led to the university being closed on May 2.

Pictured above - student Daniel Cohn-Bendit, who led the original protest in Nanterre

This provoked students at the Sorbonne, who began their own protest. Protests escalated to be more generally against capitalism and traditional institutions, values and order.

When police intervened, the Union Nationale des Etudiants de France organised a march of more than 20,000 students and teachers.

Police intervention was brutal. The protesters reacted. Each side in turn escalated the conflict, drawing in more people at every stage, until the entire country, right up to the President, was involved. Street riots  and wildcat strikes spread, rising to involve 11 million workers – more than 20% of the population of France at the time – for two full weeks.

Recently, President Emmanuel Macron proposed commemorating the 50th anniversary of that short, tension-filled period, saying he wants to speak about how utopian thought has been lost in modern politics.

This may have pleased many on the left – former socialist President François Hollande, for example, has always seen the mouvement as an expression of youthful aspiration – but it has also outraged those on the right, who see in the évènements the collapse of the moral order.

Laurent Wauquiez, the new President of the right-wing Les Républicains party, has said of May 1968 that it marked, “the beginning of the deconstruction”.

Meanwhile the students at Paris Nanterre University, where it all began, are preparing to launch an exhibition on the period.

Nicolas Blanc, a third-year history student, is one of the two organisers. For him it is important to remember what happened: “We all have a tendency to forget what came before: the battles that were fought that shaped who we are today,” he says.

In the political sphere, the issue of whether to commemorate May 1968 is still an entrenched battle of ideologies, for Mr Blanc it is simply a question of history.

“It’s our past,” he said, “and it’s interesting for the students of today to find out about the role of young people, and of women, back then.”

And he agrees with President Macron that students today are less politicised than their forbears and less ideologically driven.

“Even when they lean towards the left, they are less extreme,” he said. “Of course, there are those who are militant but theirs is a discourse that most people find perplexing.”

Some of this 21st-century political apathy is down to pragmatism, and the need to keep their heads down and get a job in a market that is challenging for young people.

“It doesn’t mean that they’re not willing to go out and fight for a just society,” he says. “It’s just that they express themselves less violently.”

The last big demonstration was in 2010, over pension reform, but it was nowhere near as incendiary as the May 1968 riots.

And it is not just the students who make a recurrence of the unrest of 50 years ago unlikely. “The situation escalated quickly in 1968 because of the brutal response of the authorities,” said Mr Blanc. “Whether left or right, today’s governments are less extreme, less prone to authoritarian clamp-downs. Under these conditions I can’t see May 1968 happening again”.

Former President Nicolas Sarkozy said he wanted to “liquidate the heritage of 1968” and many on the right of the political spectrum are concerned that commemorating it 50 years on will inspire fresh waves of civic unrest, but Nicolas Blanc does not see history as contagious.

“We just want to understand what happened,” he said. “Yes, some students and teachers will see themselves in the protesters of 1968, but learning about our history is not going to spark a revolution.”