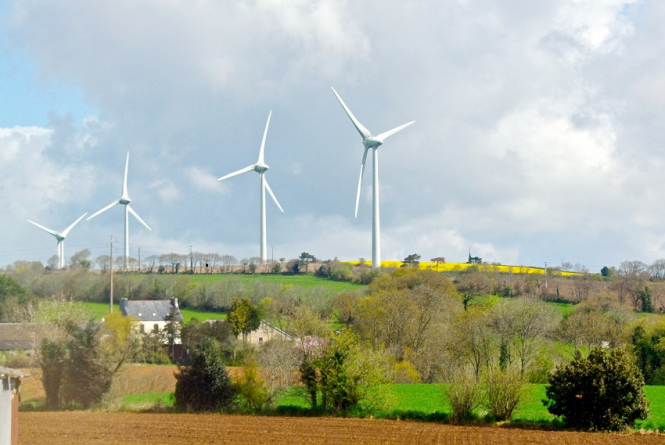 Landscapes are ‘being destroyed’
By Selma Daddi

More and more wind turbines are springing up all across France, in order to reduce the number of nuclear power stations and carbon emissions.

Although the UK produced more energy last year, France leads it in setting up more turbines, with 649 new ones, against 485 in UK.

He said: “It started in 2007, during the national ecological transition debate, but it is increasing now as it is part of the government’s official political programme, which is influenced by environmental associations.

“It is surprising that environmental activists support this, but it is mainly because they are anti-nuclear.

“Wind turbines have no carbon emissions either but we are spending more on them for no real reason.

“Reducing the number of nuclear power stations is impossible. We need something to produce electricity if there is no sun or wind.

“We would use gas or coal but we cannot be environmentalist and use these. Nuclear power stations (which use uranium) are necessary when there is no sun or wind.

“Wind turbines and solar energy are not necessary and have disadvantages.

“They do not help with the climate. They cost a lot, as we pay to manage two different types of power stations, and this means a rise in power prices.

“Germany spent €500million on wind turbines but the price of electricity has doubled. In France, we have seen a rise of 20% since 2007, and it is notably due to these installations.

“Rural landscapes are being destroyed to set up wind turbines, which can be 260 metres high. Near Périgueux, for example, there are more and more wind turbines and they are set up near houses.

“France allows a minimum distance of 500m between turbines and houses.

“There are nuisances for residents as wind turbines make noise and produce infrasonic waves which go under the houses. In the night, there are flashing lights.

“It is the same for offshore wind power but we do not see them; they do not bother anyone except fishermen. Nevertheless, they are two to three times more expensive.

“Hauts-de-France is the region where there are the most wind turbines. Regional council president Xavier Bertrand is trying to fight it but prefectures have the final say and they follow government orders. Today, environmental activism prevents us acknowledging that it is a disaster.”

Although electricity from wind turbines has become less expensive in recent years, nuclear energy is still a bit cheaper (about €62/MW against €72/MW for wind). Costings do not include decommissioning, which for nuclear is sizeable.

Mr Durand says it is a public investment mainly paid through taxes. He previously said it was not possible for wind and solar to develop without government aid – which meant a “tax” for every family of about €1,200 (if you add up all the CSPE tax you pay).

There are different taxes for all energy types but each supplier must pay the CSPE (Contribution au Service Public de l’Electricité) of €22.5/MW and it is included in the price of electricity for consumers.

Electricity prices continue to rise in France. A 6% rise is due this summer.