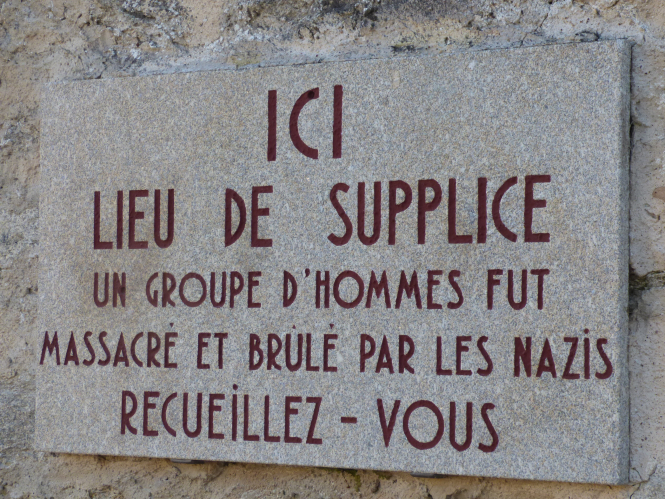 A memorial at 'martyr village' Oradour-sur-Glane
By Tim Blakemore

May 8 is the anniversary of the end of the Second World War in Europe and, while it is difficult to object to celebrations for the end of the hostilities and the horrors of the conflict, does France overdo its memorials?

All over France, solemn commemorations will take place, and many towns have a street named "rue du 8 mai 1945". The emphasis of these memorials is suggested by the title of the annual public holiday itself: Victoire 1945.

There are rarely such celebrations in Britain, let alone any mention of "victory" as the theme, despite the date being known as VE ("Victory in Europe") Day. Exceptionally, in 1995, the May Day bank holiday was moved to Monday, May 8 to mark the 50th anniversary of the end of the War.

Similarly, in 2015, there was a special long weekend of events (May 8 fell on a Friday) to mark the 70th anniversary, but there has been no consensus for the inauguration of an annual public holiday and it seems unlikely that this will now occur.

In France, however, May 8 is a national holiday, although this has not been without controversy since it was added to the calendar in 1953. In 1959, it was moved to the second Sunday, restored to the 8th in 1965 to celebrate its 20th anniversary and re-instituted as an annual event in 1968, but not as a public holiday.

The official day of commemorations was abolished altogether in 1975 with the aim to encourage reconciliation with Germany, but pressure from veterans' associations in particular led in 1981 to a restoration of the event and its recognition as a public holiday. As one of the three Fêtes nationales (along with July 14 and November 11) it now seems well established, but there are still some who would like to play down its connotations, perhaps by making it a Europe-wide festival as "Europe day", or similar.

I must register my personal standpoint for these reflections. On the one hand, my home town of Coventry was a target for mass bombing and my parents were living there at the time of the Coventry Blitz. On the other hand, I now live in the Limousin, which suffered firstly under the Vichy regime, and then saw several appalling atrocities perpetrated by retreating Nazi forces.
One of those was the massacre at Oradour-sur-Glane, near Limoges, and about which Samantha David wrote movingly in Connexion in July 2017.

What is not so well known is that the same German Division ("Das Reich") had stopped in Tulle the day before, rounded up the male population and hanged them, one after another, from lamp-posts and balconies throughout the town. Chosen at random from the 3,000 men aged between 16 and 60 who were detained, 99 were murdered in this fashion before the Nazis ran out of rope.

The German Division then moved north. Oradour-sur-Glane was their next stop.

The massacre in Tulle is commemorated and the ruined village of Oradour-sur-Glane has been left untouched as its own memorial. But there are many other reminders of these and other events.

Tulle has its own annual commemoration but also has several different permanent memorials, and publishes a booklet explaining where they all are, with maps and photographs. Almost every village has a plaque somewhere, commemorating someone who had been killed at that spot, as well as other memorials for individuals who had been deported and never returned.

Plaques are still being put up. A further four were installed in Tulle in November 2017 in memory of the "victimes de la barbarie nazie". The older memorials refer to the perpetrators as "Germans" whereas those installed in Tulle reflect the more recent tendency to use the term "Nazi".

I have been struck by the contrast with my home town. There are no individual memorials to people who died in the bombing raids on Coventry, although 70 years later my mother could point to a site where a house had been flattened and its occupants killed.

Often she would be able to relate their names and say something about them, but there is no plaque to commemorate their passing, let alone a reference to the cause as a "German bomb".
Well into the 60s there were recognisable bomb sites waiting to be cleared and built on, and shrapnel marks on some of the older buildings in the city centre, but these were not identified as such. They are now all gone, but Coventry Cathedral has been preserved in its ruined state, though tidied up considerably and with an ostentatious purpose of reconciliation.

The explanation for these differences is simple. The ordinary people in the two countries had a very different experience of the War.

Obviously both suffered the loss of loved ones in the fighting, and deprivation from rationing of necessities. But the direct suffering of the British population was caused by bombing, whereas in France it arose from occupation by a tyrannical foreign power.

While we must be conscious of the tendency to be amateur psychologists, the effect of occupation, both at the time and in the folk memory of the people, is clearly different to that of being bombed.

It is one thing to have explosives dropped on you, especially when there is a carefully fostered tradition of stoic endurance and the "Blitz spirit". There is also perhaps an underlying sense of revenge and retribution from the subsequent bombing of German cities which makes space for reconciliation and forgiveness.

Occupation, however, is a more personal and humiliating experience for the country concerned. It is no coincidence that many of the memorials in France are to the Resistance, and plaques commemorating the murder of individuals record the Resistance group to which they belonged.

All this serves to promote a notion of the sturdy opposition of the population as a counter to the ignominy of subservience to a foreign power. Even Tulle's booklet on its memorials is entitled "Tulle, resistante et martyre", carefully juxtaposing the idea of opposition to that of victim.

There was no corresponding occupation of Germany by France and the French army was not in a position to exact retribution on behalf of the French people, so the role of the Resistance in defeating the invaders is the main source for national pride.

The French can therefore be excused for making more of the end of the war than Britain and for putting up so many personalized memorials, but perhaps the time has come for a new approach to the anniversary.