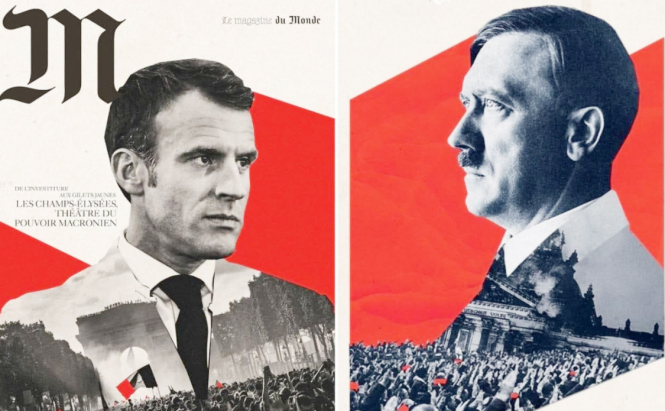 It’s an extension of Godwin’s Law – the contemporary adage that if you bring up the tyrant in online discussions, then you immediately lose your argument.

It was astonishing, then, to see Le Monde – France’s traditional newspaper of record – apparently drawing parallels between Emmanuel Macron, once projected as France’s boy-next-door head of state, and the Führer.

Le Monde denied that the stark cover image on its M weekend magazine was meant to make Macron look like Hitler, but nevertheless apologised to the many readers who thought it did. [It did however say it was inspired by Canadian artist Lincoln Agnew who drew the Hitler image for Harper’s magazine in 2017].

But it was a fixation on the Champs-Elysées that made the parallel particularly chilling.

The Macron picture showed him facing off an anti-government crowd by the Arc de Triomphe, with a headline reading: “From inauguration to Yellow Vests – the Champs-Elysées, theatre of Macron’s power.”

The reality is that the most famous avenue in France, and the neoclassical arch that it leads up to, is as much a monument to German military might as it is to French achievements.

There are numerous films and photographs of Nazis parading around it during the occupation of Paris between 1940 and 1944 (just as the Prussians did after their victory over France in 1871).

When Hitler went sightseeing in Paris in late June 1940, he was driven to the Arc de Triomphe, as well as the Eiffel Tower, the Palais Garnier Opera, the Madeleine church and the Sacré-Cœur.

He too saw the city as a beautiful theatre, instructing his accompanying architect, Albert Speer, to turn Berlin into an even more inspiring city. When Hitler got to Les Invalides, he insisted on honouring Napoleon Bonaparte’s tomb.

This was at a time when the French were starting to actively assist their invaders in the Holocaust. Paris police rounded up thousands of Jews and other “enemies of the state”, using national rail company SNCF to deport them to German concentration camps.

Now the same city police force is engaged in a mass effort to subdue the Yellow Vest movement. It has been protesting across France since mid-November, with extremists linked to it initiating non-stop riots that saw the Arc de Triomphe desecrated.

In turn, Macron has ordered an especially tough response against what he has referred to as a “hate-filled crowd”.

There have been hundreds of complaints about brutality by the authorities, with Amnesty International condemning the use of “flash-balls, disorientating grenades and tear gas against mostly peaceful protesters”.

Those of us who have covered the Paris disturbances at first hand have recorded the deployment of armoured vehicles carrying chemical weapons, water cannons and other reactionary measures.

Vast white clouds caused by the casual use of tear gas are particularly disturbing – especially as they often envelop innocent bystanders, including children and the elderly – as are savage truncheon beatings, some of them videoed.

Since his election in May 2017, Macron has become increasingly known for his single-minded approach to governance, imposing policies by decree while key lieutenants either resigned or stayed silent. Nicknames like “Jupiter” and “President of the Rich” bring to mind a ruthless egomaniac.

None of this justifies a Reductio ad Hitlerum, however.

The reason the French are so shocked by Godwin’s Law-style hyperbole is because their national psyche has yet to recover from one of the darkest periods of its recent history. Exorcising a nation’s shame requires honesty and level-headedness, and not dismal Adolf Hitler comparisons.

Nabila Ramdani is an award-winning French-Algerian journalist who specialises in French politics and the Arab world. Her articles feature in the French national press as well as internationally. She is a regular columnist in The Connexion.