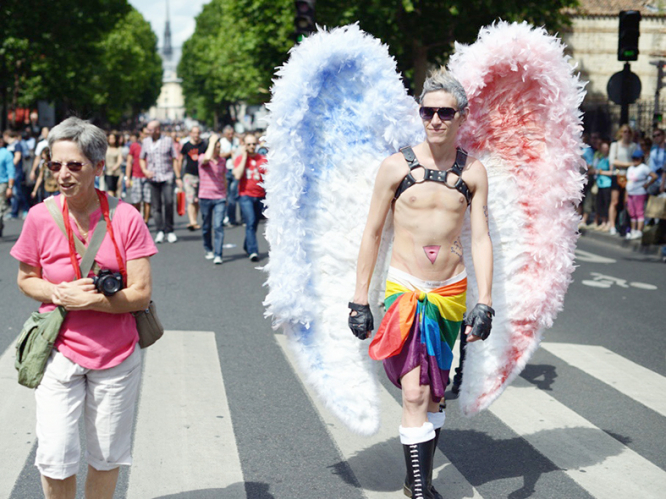 ‘What’s so good about the march is it’s inclusive, whether you’re in a suit and tie or with feathers on your head’
By Connexion journalist

La Marche des Fiertés is in its 41st year.

It is always the last Saturday of June because it marks the anniversary of the Stonewall [Inn] riots in New York in June 1969 [when the LGBT community fought back against police repression, with the first marches held in 1970 in New York and San Francisco in commemoration].

It’s very important to us to remember where and why the marches were born.

It’s at the same time festive and campaigning and these aspects complement each other. Apart from the symbolic aspect of remembering our history, by enshrining certain demands in the official campaign goals of the march we help to make sure they are on the political agenda.

It is affirming. We take ownership of the public space, we stake our claim to be who we are, we challenge gender stereotypes, and we march for those who, in certain countries, do not have such a right.

Whether you’re LGBT or an ally, each person finds their reason to join in. We stand for respect for inclusivity and diversity. This year’s demands will include the right to fertility treatments, changes in family laws [so there is a presumption of a parental relationship when a couple is bringing children up, regardless of their sex or whose the child is biologically] so LGBT people do not have to adopt their own children, and the right to legal gender change based on self-identification.

We will continue to demand an end to persecution of LGBT people in the world.

We work closely with the police to ensure safety. As LGBT people we’re a target for reactionary movements and we still see in daily life that – despite some legal advances – people are assaulted just for being, or being perceived to be, LGBT.

It won’t stop us and we will continue to take to the streets. There’s still a lot of educational work to be done to combat discrimination and violence.

Some people criticise prides because some participants dress extravagantly, and say they are giving the wrong image, but it’s the wrong way of looking at it.

We’re not there to give a certain image, just to be visible.

Even in our own ranks some people make such remarks, but they’re based in conformity to straight, cisgender conventions, which we are opposed to.

It’s very divisive to suggest there are ‘good LGBT people’ who conform and ‘bad’ ones who don’t.

What’s precisely so good about the march is it’s inclusive, whether you’re in a suit and tie or with feathers on your head.

In fact we must fight hardest for the right of those who are more ‘extravagant’ because the march is for them a way to express themselves, a release, a way of pushing boundaries and challenging society’s stereotypes, sometimes even making fun of ourselves.