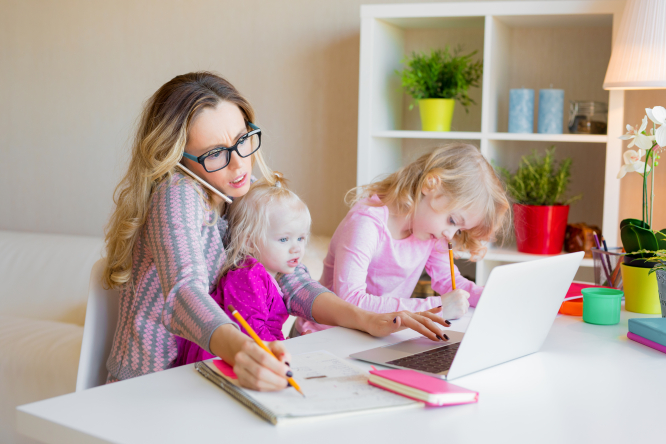 According to German journalist Annika Joeres, French mothers do not feel this sense of guilt when they step away from the kids to work or (gasp) have a life. Pic: Kaspars Grinvalds / Shutterstock

As a mum of five, I am no stranger to motherhood guilt. Particularly the sort that comes with working almost full-time while raising a family.

The fact that I work from home alleviates this a little – after all, I am ostensibly ‘there’, even when sitting red-faced at my PC asking them to “please give mummy a minute to finish her work” (or less publishable words to that effect...). But I am constantly left with the nagging feeling I am not quite getting the balance right.

I used to think this was normal, but French-dwelling German journalist Annika Joeres recently observed that French mothers do not feel this sense of guilt when they step away from the kids to work or (gasp) have a life.

“[In France] there is no debate about whether children are harmed if they are not cared for by their own mothers,” she claimed.

Like many British working mums, I believed feeling guilty when leaving my kids was inevitable. Articles in UK publications constantly debate whether women can have it all.

More often than not, the answer is no. Not unless you want to be stressed, sleep-deprived, riddled with guilt, and frowned on at the school gates.

Could it be that feeling a complete and utter failure when less than 100% present is a cultural thing? Almost all of my French mummy friends work, and it is common practice to send little ones to granny during half-term, or put them into daycare.

If they feel any guilt, they hide it well – it is just what happens here. Perhaps the mindset that it is actually OK for mums to retain some individuality and have a career without a side order of angst is what underpins the amazing childcare provision in France. Crèches are subsidised, child benefit is generous for those who qualify, and playschemes are common.

All is set up so family life can run smoothly without mum.

But do the children suffer? Apparently not. Rather, activities outside the home are seen as a vital part of their development. My son’s teachers, concerned about his lack of confidence, recently suggested I put him in a local daycare club on Wednesdays, implying his struggles were linked to the fact that home life is too enjoyable.

Sadly, old habits die hard and I cannot shake my ingrained belief that I ought to be on hand at all times. At this rate, I will still be carrying my youngest around on my hip when he’s 45.

Perhaps I should try to embrace a different attitude to parenting. One where I can take a step back sometimes without guilt. Where I do not micromanage my children like the mother meddler I have become. Where I embrace a more French attitude to parenting and give myself an emotional break. Not only would it help me to relax, it might make me a better mum

I deserve a gold star for choosing to raise my five kids in France
Reader experiences: What it is like to be your own boss in France

Aerovillages project in France: Housing estate with planes in garage
20 January 2022
More from Your views
More from Connexion
Get news, views and information from France
Join the newsletter
Subscribe to The Connexion