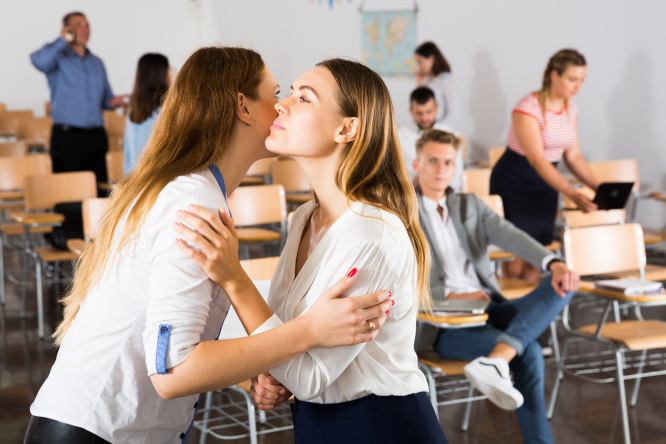 Sociologist Jean-Claude Kaufmann's prediction is that in some situations cheek-kissing will return as normal, but not in every instance Pic: BearFotos / Shutterstock

France’s customary two – or three, or four – kisses on the cheek have cemented themselves into greetings between family, friends and even colleagues over the years, but in the wake of the health crisis la bise now stands at an uncertain juncture.

Sociologist Jean-Claude Kaufmann, who studied the cultural significance behind the ritual for his new book Ce qu’embrasser veut dire (What kissing means) fears the past year might have changed it forever.

“There exist two opposing movements which structure our social lives and relationships today,” he says. “The first is a ‘distancing from the Other’. Nowadays, we have more and more of a tendency before entering into a relationship – whether that be friendly, professional or romantic – to analyse what is in it for us.

“This is something that we see on dating sites, when people swipe through different profiles and imagine all the disadvantages of beginning a life with this or that person.

“We begin by evaluating all the inconveniences, the risks – and the Covid pandemic has accentuated this. The Other is now seen as being the harbinger of a potential danger, and so we distance ourselves from them.”

He says this creates a society which is so “dry, cold and difficult to live in that a contrasting movement is provoked”.

For this reason, the impulse to kiss, hug and touch friends and family is now, conversely, stronger than ever.

“This does not involve the rational brain so much as our deepest desires, which rebel against this cooling of interpersonal links. It allows us to pause the part of our brain which over thinks everything and to find release in getting close to others, partly through kissing – whether those kisses be romantic or in greeting.”

'Small pecks' only really arrived in the 1960s

Dr Kaufmann says the latter – small pecks – only really arrived in the 1960s.

“At the beginning of the 20th century, more than one in two couples did not kiss each other. In the 19th century, the majority of courtships had involved holding hands or brushing against each other’s legs.

“In the book, I explain the way the ritual developed from the early 20th century. “From the growth of affectionate kisses behind closed doors, we see emerging kisses between friends and, until the pandemic began, within one’s work circle.”

In this context, la bise, he says, was a way of proving one’s humanity: “To say ‘We are not just colleagues, we are more than that’.”

However, the pandemic has made people look at whether it is entirely positive. “Some people are very tactile and drive the proliferation of la bise, not realising some do not enjoy it and see it as an intrusion.

'Before the pandemic, no one questioned la bise: everyone was silently obliged to join in'

"However, the fact this has been paused during Covid made us ask: Is it good? Is it bad? Do I feel comfortable? So people are realising they felt pressured into doing something highly disagreeable.”

He cites a business owner who kisses his employees on the cheek; he might want to show he is on the same level as his staff, but it can be misconstrued. “People are beginning to claim their right to withhold consent, partly because of #MeToo. For some, la bise has grown excessively and they want to be able to choose when to do it.

“It will be a surprise for many to discover their desire for tactility is not shared by all, but we are in an age where we must consider, recognise and respect the wishes of each individual.”

Dr Kaufmann’s prediction is that in some situations cheek-kissing will return as normal, but not in every instance.

“It will be good for people to realise there are different positions. Because someone refuses la bise does not mean they refuse the friendship or courtesy being offered.

“I believe the new ritual surrounding this kiss will be more rooted in respect for the Other.”

Could Covid make the French kiss goodbye to workplace 'bise'?

Non! We French shouldn't have to kiss everyone we meet

Who still has to pay the taxe d’habitation in France in 2022?
22 January 2022
More from Your views
More from Connexion
Get news, views and information from France
Join the newsletter
Subscribe to The Connexion