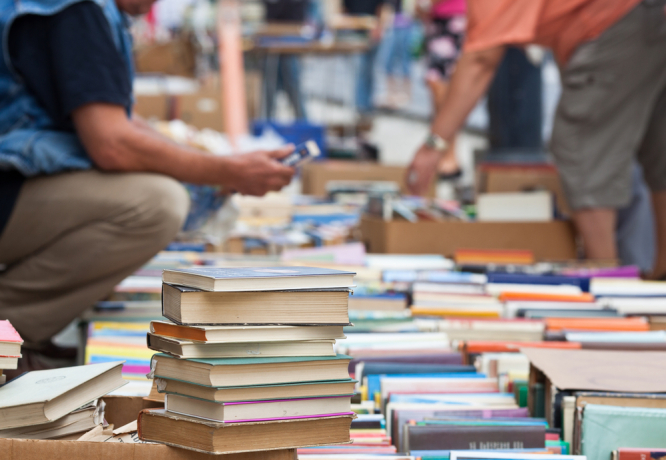 There will be over 20,000 books on sale at this year's Great Phoenix Book Fair, as well as DVDs, CDs, vinyls, games, plants and more Pic: CoolR / Shutterstock

The Great Phoenix Book Fair will take place in Campsegret in Dordogne, and will have over 20,000 books on sale, as well as DVDs, CDs, vinyls, jigsaws, children’s games, plants, etc.

All proceeds will go to the Phoenix Association to continue the work of caring for and rehoming animals in need.

The event will be held outside and health protocols will be followed.

Special guest Mr Walker will cut the Phoenix Birthday Cake at 10:00 and afterwards he will hold a book signing session.

Mr Walker is best known for the Dordogne Mysteries series featuring the character Bruno. The 14th installment in the series, The Coldest Case, is set to be published later this year.

This year also marks the 20th anniversary of the Dordogne-based animal charity.

The Phoenix Association was one of the first English-speaking animal rescue charities to be formed in France. It was created by British friends, Rik and Sheelagh Johnson, Roger Farrow and the late Phil Lieb, who, seeing the numbers of abandoned or unwanted animals in the countryside, decided to do something to change the situation.

Since then more than 8,000 animals of all types have been helped. Phoenix Association does not have a refuge centre, instead foster carers look after dogs and cats in their own homes until someone can be found to adopt them.

Its aim is to work with maximum care and attention with a small number of animals at a time. On average, 125 dogs, and 65 cats have been adopted every year since it started.

The charity also acts as an intermediary between local animal shelters and members of the public wishing to adopt from them and campaigns for the systematic sterilisation of all animals offered for adoption by French shelters.

In partnership with other agencies, such as Sos Chats Libres, 30 Millions d'Amis and Société Protectrice des Animaux, hundreds of feral cats have been medicated and sterilised.

There is also the PPP dogs Phoenix Pensioner Plan where the adoption of elderly dogs is encouraged by giving adopters a sum of money to help cover the likely vet bills. Other animals including horses, sheep, birds, donkeys and hedgehogs have also been helped.

Phoenix Association depends on donations and fundraising events to cover costs, which can easily run to €90,000 a year, nearly all of which is for vets’ bills.

The main fund-raising events are the twice yearly book fairs.

The charity is also asking members if they can help by organising mini-fundraisers throughout 2021, for example a coffee and cake morning,  mini dog walk outing, mini plant sale, virtual quiz etc and are asking anyone with any ideas to discuss them at the Book Fair or email treasury.phoenix@gmail.com

Phoenix always welcomes new members and is looking for volunteer foster families for dogs waiting to be rehomed.

This year’s fair will take place at the Salle Municipale in Campsegret. It is free and there is free parking available too.

For more details, you can check the Phoenix Association Facebook page at this link.

13 hours ago
5
Coronavirus: Daily updates on the situation in France

France’s champagne vines hit by mildew but Covid stock stops shortages
28 July 2021
More from Community
More from Connexion
Get news, views and information from France
Join the newsletter
Subscribe to The Connexion