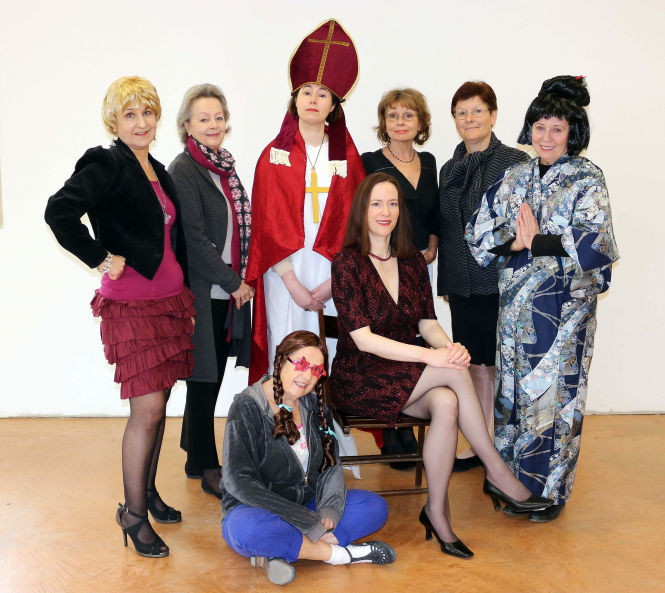 An all-female cast from an English language amateur theatre company will be playing Top Girls in June to both an expat and French audience.

The actors are part of the Vagabond Theatre Company, based in Lectoure in the Gers, which was set up two years ago. They have been encouraged to continue putting on plays after sell-out performances by a mixed cast of a Pinter and an Ayckbourn play. Their director, Ann Jones, says that even though the plays have demanding texts they have been successful in bringing French and expats together: “I am very enthusiastic. We enjoy a lot of support from the French community and we provide a summary of our plays in French in advance so that it is more accessible to our non-English speaking audience.”

The company grew out of a play reading group where some of the members expressed an interest in putting on a play. As Mrs Jones has performed both in the UK and France, where she has toured a one-woman show and appeared at the Edinburgh Festival and the prestigious Avignon Theatre Festival, she was persuaded to direct their first play - Night School by Pinter: “We were very surprised, because though we are in the countryside, people came and they also said they hadn’t realised Pinter was so funny.

“It was very encouraging. I hope people will enjoy our new production which we chose because circumstances meant that the people available to put on a play this season were all women. Not many people know about Caryl Churchill but Top Girls, which was written just after Thatcher became Prime Minister has such good writing and she talks about power and relationships and just what women can do which are current themes which should appeal to both French and English audiences.”

The theatre company is hoping to put on further productions in the future and would welcome new members, either to work back stage or on stage and whether or not they have had any experience:

“I am finding working in the Vagabond Theatre Company really enjoyable,” says Mrs Jones, “because people have come up to me and said they want to have a go but that they haven’t done much or any theatre and they are not sure whether they will succeed, but then they find that they can perform really well. I am discovering that there is a great deal of enthusiasm and a huge amount of talent out there. It is very exciting.”

There are no membership fees and the group have a four-and-a-half month rehearsal period before each play when they rehearse twice a week.

Top Girls by Caryl Churchill is on at the Salle de la Comédie, in Lectoure, June 3 and 4 at 6pm.

For more details of the performance and/or joining the theatre company contact  floyd.lucy@googlemail.com