Green-fingered readers who weed it and reap 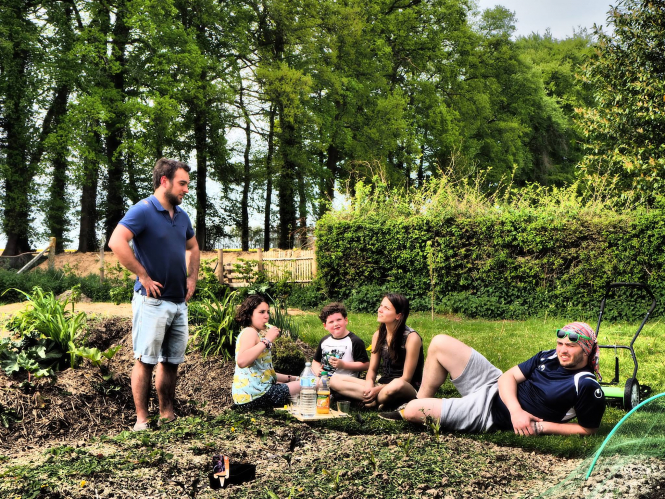 From grandfather to grandson ...

A young landscape gardener started an association for ‘potagistes’ after becoming passionate about growing
vegetables.
Louis Poirrée, 23, learned about gardening from his grandfather before doing a training course to learn more about cultivation.
“My grandfather taught me to grow vegetables using traditional methods: lots of weeding, aligning plants very straight, and digging the earth all the time.”
Mr Poirrée started an allotment at his property in Yvetot, near Rouen in Normandy, a year-and-a-half ago.
He became so enthusiastic about his work that he launched an association called Le Potagiste, a collective of like-minded individuals who grow fruit and vegetables in public spaces.
“We work with allotments in public spaces such as social housing. There are 12 people in the association, and we are all professional landscapers.”
Mr Poirrée grows various types of vegetable in his allotment, including old varieties such as courges galeuses, a type of large, round courgette with a ‘mangy’ or bumpy skin, and Westlandse winter kale. He also grows flowers on the two-hectare site with help from a few volunteers. “I grow the vegetables for food: I basically only eat vegetables, although I’m not actually a vegetarian. I would eat meat if I went out to a restaurant with friends.”
Mr Poirrée also keeps donkeys and pigs, but these are for farm visits, not for meat. “I couldn’t kill them,” he said.

Fresh produce from her vegetable patch, and more time outdoors have improved Sheila Birkenshaw’s arthritis.
Mrs Birkenshaw, 72, moved to Montalembert in Deux-Sèvres in 2009, after retiring from a busy life as a fashion stylist. “When I was working I ate quick ready-meals.
“Here, I have fresh fruit and vegetables from my garden. My arthritis has improved a lot: I think it is being outside more, eating healthily, the lifestyle, and quality of food in France.
“The climate also helps. I have bad patches when it’s damp but here, although it gets cold in winter, it is quite dry.”
She grows onions, tomatoes, green beans and salads, as well as raspberries, blackcurrants and strawberries. “It is lovely to go outside and pick what you need for a recipe,” she said.
Wherever possible, she avoids using pesticides. “I keep chickens, so the manure gets dug into the ground, and I also have a compost bin,” she said.
“It is useful to combine plants that work well together: certain plants help each other grow, whereas others you should keep apart. You should also rotate your crops; for example, don’t always plant strawberries or tomatoes in the same area.”
Mrs Birkenshaw had always been interested in growing her own produce. She said: “When my mother was alive we had a small allotment. But it was very different from my day job!”
Moving to France was a long-term dream that came true after several ‘research’ trips. Her son, Jay, 41, has helped renovate her house, and has decided to settle in the area.

Delicious veg and meadow flowers are my wife’s legacy

A successful growing season meant Mark Bennett was able to give away some of the delicious results of his labours.
Mr Bennett, 73, has kept the polytunnel in his garden going since his wife Melanie died, at the age of 67, last February.
“It was Melanie’s thing,” he admitted. “I am not really green-fingered.
“However, the polytunnel produced too much, so I put a notice on the wall outside the house for people to help themselves. It seemed to be appreciated locally.”
Mrs Bennett had turned the front lawn of the couple’s Brittany home into an allotment, and improved the soil with manure donated by local pig farmers, and friends with gîtes who run donkey rides.
“The free pig and donkey muck we received every year helped enormously,” said vet Mr Bennett. “For the first few years, Melanie grew potatoes, beans and sweetcorn.
“The commune has a ‘maison fleurie’ competition, which they then extended to eco-potagers. Melanie won a prize for two years: a €50 voucher to spend at the garden centre.”
The couple moved to France six years ago from Wareham in Dorset, where Melanie had been secretary of the local allotment society. After her death from a brain tumour earlier this year, Mark sowed wild flowers in an allotment she kept further up the garden.

Tips to help you grow your own

1. Allotments (usually known in France as jardins familiaux, but also sometimes as jardins ouvriers) are managed by local associations. Plots are assigned for personal use.
2. Anyone interested in having an allotment should first log on to the website www.jardins-familiaux.asso.fr – to find details of more than 300 local groups.
3. More than 20 cities and towns in France are members of the Rotaract club of Versailles’ Potalib (a contraction of potager libre) scheme, which helps communities and local organisations grow and harvest healthy food. The scheme supplies seeds for up to 18 kinds of vegetables, gardening advice, and 12 wooden bins, each filled with about 270kg of soil.