Cookie Consent by FreePrivacyPolicy.com How France changed our lives in ways we could never imagine French News and Views in English | The Connexion
9 may 2021
Classifieds Currency exchange Newsletter
Login Register BASKET
Facebook Twitter

How France changed our lives in ways we could never imagine 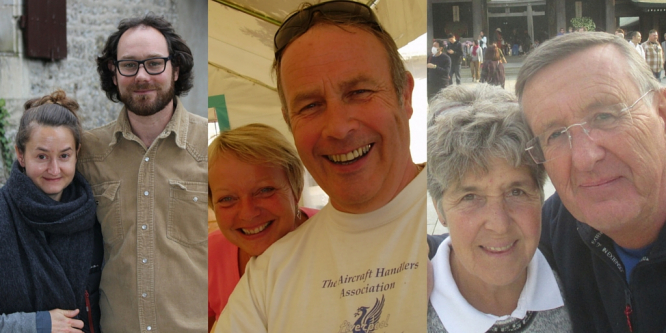 We gave up our support network – and we're thriving

Lucy and Christopher moved to Charroux in early 2015, in order to reduce their stress levels and spend more time with their six-year-old daughter, Mabel.

“I was working for the government,” explained Christopher, “and Lucy was a director in a PR company.”

As the couple both worked long hours, they had little time for family life.

Lucy said: “Mabel had started school, but she was sandwiched each end of her day with childcare. We lived in central London, and both our jobs involved being on hand, networking, attending dinners.  It was a hectic lifestyle.”

In 2014, Lucy’s parents — John and Carol — who had owned a property in France since 2000, running it as a chambre d’hôtes, decided to sell up and retire.

“They wanted to purchase a smaller property in France,” explained Lucy.

“It was make-or-break time for us. We bought my parents out and decided to change our lives.”

The couple now plan to open a small nursery/garden shop on the site and Christopher is busy carrying out renovation work to make this possible.

“We’re hoping to have a coffee shop, garden centre and little craft shop — like the garden centres you often find in the UK,” added Christopher.

Back in the UK, both Lucy and Christopher had high-pressure jobs, but they have now both been able to spend more time with Mabel and be more involved in everyday family life.

“When we were career-minded we had a support network — cleaner, childcare ... Now it’s up to us,” Lucy said.

Lucy also runs yoga classes and personal yoga sessions. “It’s odd being the only one with a kind of ‘day job’,” she laughed.

“But Chris is enjoying spending time with Mabel, as well as working with his hands learning new DIY skills. Plus, obviously things will change when the garden space is up and running.”

Lucy’s superior skills in French mean that she is the one who deals with the piles of paperwork that come with emigrating to France and starting up a new business.  “We shared the admin in England,” she admitted.

“It wasn’t particularly stressful, as we both knew how everything worked and could get on the phone if there was a problem.

However, any frustrations Lucy may feel should be short-lived. “Chris is learning French, so I know it won’t be forever,” she said.

Being around each other 24/7 was strange at first, but we work well as a team

Having met in the Royal Air Force, Phil and Janet Judd soon became used to living in foreign climes, as well as spending long periods of time apart.

“I was a firefighter in the force for 33 years and we travelled all over, living in Germany and Cyprus for a period of time,” said Phil.

“Then, when the kids were young, we bought a house in Norfolk and Janet stayed there while they finished school.”

However, after more than three decades in a highly stressful job, Phil, now 58, felt that the time had come to retire and in 2008 the couple chose France for their forever home.

“We’ve always loved France, and now have a lovely home with a huge vegetable plot, sheep, chickens and pigs,” said Janet. Happily for the couple, Phil has thrived in their new rural setting. “I was taking blood pressure medication when we arrived,” he said.

“But since moving here, I’ve been able to stop taking it.”

To raise a little extra cash for their French lifestyle, Janet has registered as an auto-entrepreneur, and now works for a few hours every week cleaning for others.

“I love getting out and about and meeting people,” she said. “Plus, it gives us both a bit of space.”

Not only did Phil have to cope with the complete change of pace that comes with retirement, the couple had to get used to being in each other’s company all the time.

“Phil had often been away for long periods of time during his career,” explained Janet.

“So I did wonder what it would be like with him around all the time — whether we’d get under each other’s feet.

“But, thankfully, we’re both really enjoying being together.”

“He’s great with the housework, too,” she added.

“He’s been in the military, so he’s used to cooking and cleaning and does it as a matter of course. I’m very lucky. It’s not his job, or my job. It’s ours.”

Ronnie's happy to let me run our B&B

When Vicki and Ronnie Priestley decided to make the move to France, it was — in part — so Ronnie could retire.

“I worked in the defence industry for years; the job was high-pressure and we were always travelling,” he explained. “I wanted to have a quieter life when I retired.”

For Vicki, however, the move meant realising one of her personal dreams, of running a bed and breakfast.

“Although I worked in the UK teaching riding for the disabled, it was more of a voluntary role, really,” she said. “I’d always dreamed of running a guest house.”

Having lived in many places from the USA to Malaysia in the course of their married life, the couple had no particular desire to move back to England, and instead chose France, settling on an old hunting lodge near Angoulême.

“Although we didn’t want to move to the UK, I wanted to be close as my mother was still alive at the time,” explained Vicki. “And, as we had three grown-up children living there too, it made sense.”

Having spent two years bringing the property up to scratch, ‘Les Chassins,’ was finally opened in 2011, with Vicki firmly at front of house.

“I’d trained in institutional management in the 1970s, and never really used my qualification, so I really wanted this opportunity to use my skills,” said Vicki.

“Ronnie was more than happy to take a back seat. He helps with the maintenance, but he’d rather not interact with the guests!”

In fact, Ronnie often uses the direct door the couple have from their bedroom to the garden to avoid coming into contact with those staying at the B&B. “I just want a quiet life,” he said.

Even when the B&B is overbooked in the summer months, Ronnie manages to keep a low profile.

Although the complete change of pace Ronnie has undergone wouldn’t suit everyone, he is happy working in the garden, or planning their yearly trip abroad.

“I do sometimes worry he’s not using his brain enough,” admitted Vicki.

“I think he should write a book or something, but he’s happy as he is.”