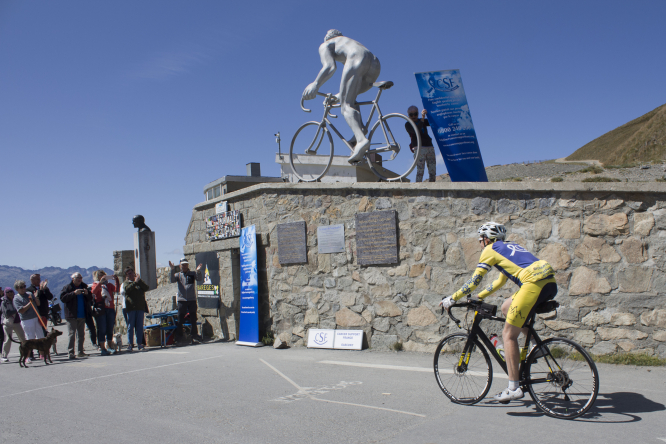 A cyclist has raised more than €2,500 after completing a 1,000km-plus ride from the Eiffel Tower to the top of the Col du Tourmalet in the Pyrenees in eight days to raise funds for Cancer Support France.

The long-distance challenge was one of three Chris Dowd, from Castelnau-Rivière-Basse, Hautes-Pyrénées, had set himself for this year. It came after he had taken part in a four-day, 640km endurance cycling challenge called the Ardéchoise - and is part of his plan to cycle 15,000km in 2019.

After reaching the top, he was greeted by more than 20 members of CSF, including Pat Lockett, the CSF National President, and Jayne Ray, the CSF Gascony President - who presented him with a gift - and a well-earned glass of champagne.

Mr Dowd wrote on his blog on the CSF site afterwards: "I felt really good climbing Tourmalet, so good that I was setting a personal record pace, but had to hold for over 30 minutes at La Mongie in order to avoid arriving at the Col before anyone else!  I had planned a very pessimistic timetable, that turned out to be exactly the opposite of how I felt on the day."

The money he raised will be used to train CSF's Active Listeners spread across France.

“After 33 years behind a desk, I was able to retire early,” he told Connexion before he set out on his 1,182km Paris-to-Pyrenees trek. “I took up cycling in 2016 to lose some weight, get a bit fitter and enjoy the countryside, but it quickly became an obsession and an addiction.

“I love to push myself, and my challenge for CSF does just that, while hopefully raising money for a fantastic cause.”

Mr Dowd says he discovered the charity shortly after he arrived in France three years ago: “I know a couple of people who have used the service and found it really helpful.

“I also found out that two other friends are listeners. I have heard a lot about CSF since I moved here and think it is a very good charity.”

14 hours ago
5
If France is not on UK's green top travel list when is next review?