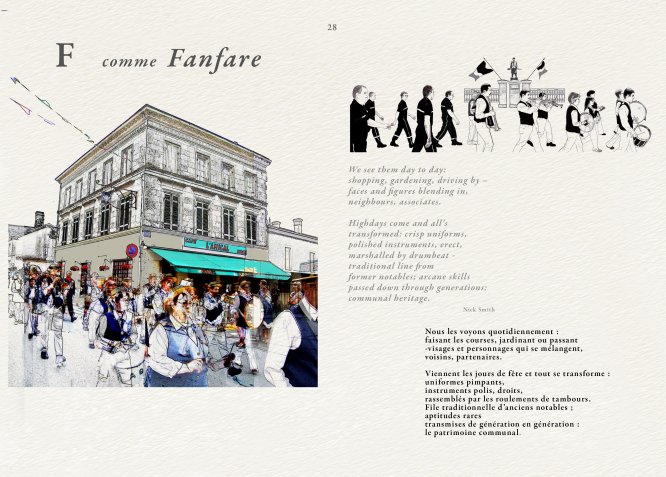 Artist Martin Salisbury and teacher wife Jenny won the award with poet Nick Smith and two French members of the local history society after two years of work on the bilingual history of St-Fort-sur-Gironde, about 80km north of Bordeaux.

“They had seen one of Martin’s books, L’Amical Café produced for an exhibition, and wanted him to help them produce a history of St-Fort-sur-Gironde.

“After much sweat, blood and tears the book was finished. It has sold more than 200 copies. We are proud.”

Jacky Quesson, mayor of St-Genis-de-Saintonge, which includes St-Fort-sur-Gironde, presented the historical society with a trophy for cultural achievement for the book.

He praised the British community in front of a huge audience, saying: “Our friends have been faithful to our region and they have contributed to the life and vitality of the area.”

The hardback book itself is beautifully designed with a collection of writings, poems, illustrations and both contemporary and old photos.

Telling the village’s story in the form of an alphabet book, often with several entries for the same letter, it has texts in both English and French.

One particularly moving story is of wartime mayor Maurice Chastang who rejected Vichy and joined the Resistance. Betrayed and deported to a concentration camp, he died on the ‘march of death’. His wife, Renée France Chas­tang, took his place as mayor from 1944 to 1945... when women did not have the right to vote.

Mrs Salisbury found it rewarding: “It was hard work and I spent sleepless nights worrying about whether I had got it right. It was fascinating and I met so many interesting people.”

Some letters were a problem: “X was difficult, but many houses have iron x-shaped crosses on them to reinforce walls against cracks in long, dry summers. Plus St-Fort is in the historic province of Saintonge and the original spelling was Xaintonge or Xainc­tonge. Its capital city was Xaints or Xainetes.”

The book costs €25 and can be purchased from Marie Claude Harbonnier 05 46 49 95 03 (French)
or by emailing jennycivrac@gmail.com (English).