No names, no pack drill – RAF pilots tell all 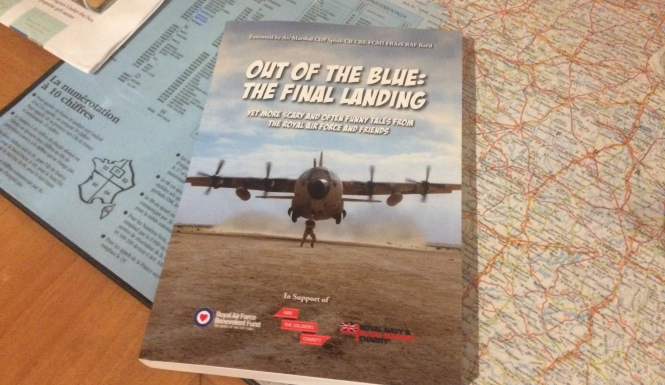 When former RAF pilots get together it is a time for tales, whether tall or not, and a reminder of hair-raising and hare-brained schemes. That is how a charity book venture started – plus some glasses of rosé round a pool – and it has now raised more than £60,000 for Forces charities.

Written by Chris Long, Dim Jones and Ian Cowie, the first book Out of the Blue started to take form after they met at Chris’s home in Toulouse. As the wine and stories started to flow Chris and Dim started to realise that many of the tales – Goodness, was that you!? – deserved wider publication.

The trio had first met at RAF Cranwell as flight cadets in the mid-60s and their Out of the Blue books carry gossip and true stories from friends, friends of friends and many others. The first book was so successful it led to the second, Out of the Blue Too and, now, a third Out of the Blue: The Final Landing.

Final Landing rounds up 110 tales from the Second World War to the present day and has, like the others, a foreword from Air Marshall Cliff Spink.

The tales vary from the sublime to the heart-warming.

Here is a taste: One pilot being sent to become a Basic Jet instructor on exchange with the French air force had to show his teaching skills while flying a Fouga Magister jet trainer. The test was to demonstrate and talk through a spin where he would show a trainee how to handle the spin and get out of it safely.

The problem was that the pilot’s language skills had not caught up with either his flying skills or those needed to explain what he was doing.

As he says: “All was going swimmingly apart from one slight detail. The rate that things were happening was considerably greater than the rate at which my poor French could explain it.”

The French colonel in the back seat testing him said in his report that “I had most of the right words, and that they were in the right order, but just a little slow. He was reassuring – he said that he was sure that my French would speed up with a bit of practice, but that, in the meantime I was unlikely to kill myself or my student.”

French pilots also make an appearance, with Marcel Berthomé, the oldest Maire in France at 94 years of age, and who flew in the dark blue uniform of the Armée de l’Air with the “Groupes Lourds” – the two French Air Force Halifax Squadrons, integrated within Bomber Command at RAF Elvington.

Then he tells how his mairie in Saint-Seurin-sur-l'Isle does it: “In my commune, I run things using the principles I learned flying with the RAF from 1943 to 1945. You define your aim and you stay focused on that, not allowing extraneous things to divert you.”

One chapter, A Darker Shade of Blue, details the trials that French pilots faced when they tried to join up with the British – and the real danger their families faced back home.

Survivors from Mr Berthomé’s squadron are few and all, like him, nonagenarians. One tells of a drive across France in 2015 where he stopped in a village where he recalled one of his squadron friends had originated. That friend had been killed in an attack over Germany in 1944.

He stopped beside the village War Memorial to check for his friend’s name. On seeing it was there, he paused for a few minutes in reflection. He became aware of an elderly lady at his elbow.

She asked what he was seeking. When he told her, mentioning his friend’s name and telling her of his loss with the RAF, she told him that she had been engaged to the young man before the war, that she had been told that he had died, but that, until that chance meeting, she had known nothing of the when, how or where.

Out of the Blue: The Final Landing is a perfect idea for Christmas. It is on sale through the RAF Benevolent fund – all the proceeds are split between the RAF fund, the Royal Navy and Royal Marines Charity and the Army Benevolent Fund – the latest book costs £9.99