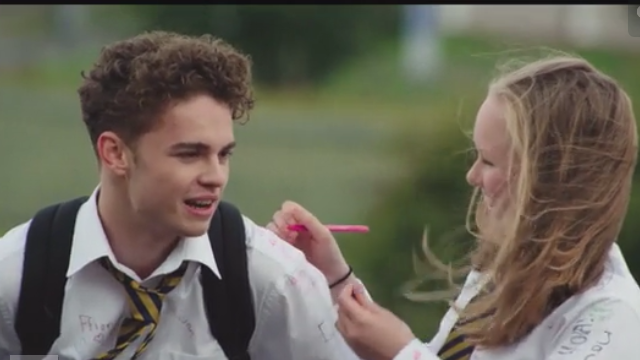 Still from 'Ferris and the Fancy Pigeon', about bullying
By Oliver Rowland

British short films, press cartoons and pop music are being showcased in Rouen next month at the This is England Festival.

The festival (more information at this link) focuses on new British short films by up-and-coming or established filmmakers and is increasingly broadening into a celebration of British culture: this year it ties in with the first French exhibition by Guardian cartoonist Steve Bell (see more below) and a concert by Bristol-based Britpop group The Jacques.

Also this year organisers are inviting 4,600 lycée and college students to special daytime screenings during the festival, from November 13 to 18 at the Cinéma Omnia République. It is the sixth annual festival organised by the Rouen-Norwich Club.

One of the organisers, English teacher Nathalie Le Gendre, said: “Rouen and Norwich are twinned and like all twinning committees, the club was running out of steam a bit and so to give it a boost we created this event.

“This year we have made a special selection for the collèges and for the lycées, together with teaching materials and a training day for teachers.

“And each evening we will be screening films for the public with, at the end of the week, a jury prize and an audience prize.”

Ms Le Gendre said: “Many of us in the twinning club are English teachers, so we do French subtitles for the films over the summer.

“We try to have a diverse selection. They aren’t all light or funny, but they bring out themes of what is happening in society – in the collège selection, for example, there are some on the theme of bullying and on family relationships.

“There’s one called Kin, which is very powerful, about a big brother who would like to be able to look after his younger brother because they’re both orphans. Using the phone is another topic – such as going on social networks at the dinner table.”

Ms Le Gendre added: “More and more British directors come during the festival and say they are happy to be involved and maintain this contact.

“It’s a living proof that despite what might be happening in politics, we can retain these warm human links.”

The Steve Bell cartoon exhibition is already on show at Rouen’s Hôtel de Ville gallery (pictured below - one of the pieces on display, inspired by French artist Délacroix).

Ms Le Gendre said it came about at the invitation of the Rouen-Norwich Club, because one of its members has a long-standing link with Mr Bell.

“He’s a former English teacher who, on one of his school trips had asked to meet Steve Bell with his pupils because he enjoyed his caricatures.

“After that, each time he went to England Steve Bell would devote some time to meeting the group and showing them how he works – it was around 18 years ago now.”

film
British
More from Your News
More from Connexion