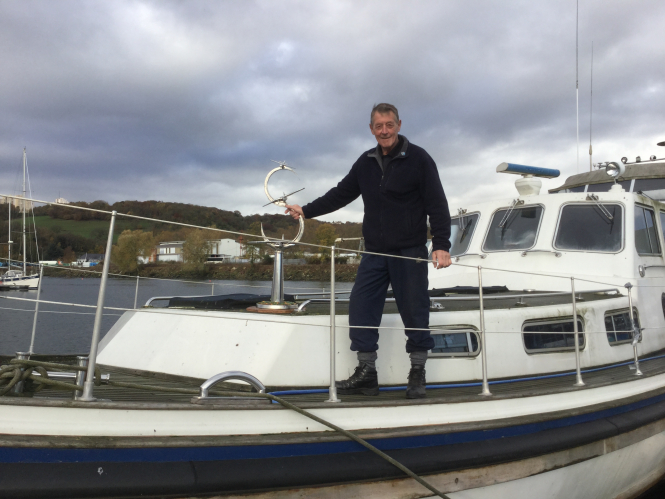 A former SAS soldier has been to France to raise awareness about a memorial he is establishing in the Allied Special Forces Memorial Grove at the National Memorial Arboretum in Staffordshire.

Michael Colton is Secretary of the Allied Special Forces Association which created the Memorial Grove, and for three years he has been working on a memorial to commemorate “Operation Deadstick”, one of the many missions vital to the success of the D-Day Normandy Landings.

Last year, he raised enough to produce a one metre model of the final sculpture. But the project needs another £30,500 to complete the 5m memorial.

The lower column has already been installed. The design is of three gliders descending on a giant S-shape and is symbolic of this most Secret operation carried out in Silence with Speed, Stealth and complete Surprise. Mr Colton says its purpose will be to make sure the bravery and skill of the men who carried out the mission will never be forgotten.

Just after midnight on June 6th 1944, 180 men from the Ox and Bucks Light Infantry were landed by army glider pilots just metres from the River Orne bridge at Ranville (Lower Normandy), and the bridge across the Caen Canal, at Bénouville, and captured both of them in less than 10 minutes. At 26 minutes past midnight the signal ‘Ham and Jam’ was sent to Combined Ops HQ and reinforcements were called. This operation protected the entire left flank of the Sword Beach invasion from the 21st Panzer Division.

The men in the gliders were commanded by Major John Howard and had been training for this one operation for over two years: “It was an amazing achievement,” said Mr Colton.
“Thirty men were in each of the six gliders made out of plywood and canvas. Only five gliders landed beside the original target. It was a suicide mission. They had to get into what was not much more than a cardboard box, which they then had to crash land as near to the bridges as possible.

A total of 30 Royal Engineers, who had travelled in six gliders had to get under the bridges and rip out wires and demobilise explosives, with the real possibility that they would be blown up.

‘‘Two men died within minutes, one because his glider crashed into a pond and the other was shot. But both bridges were captured intact. They then had to hold them for two hours until help arrived.”

The bridge across the Caen Canal was later baptised Pegasus Bridge as a tribute to the British troops, who wore the winged horse emblem on their sleeves, and the bridge itself is now on display at the Memorial Pegasus Museum at Ranville.

Mr Colton has been collecting funds on both sides of the Channel: “Children aren’t taught about these missions in school and I think it is important there is somewhere they can learn about these war heroes.” Those who cannot travel to France will be able to learn in the UK.