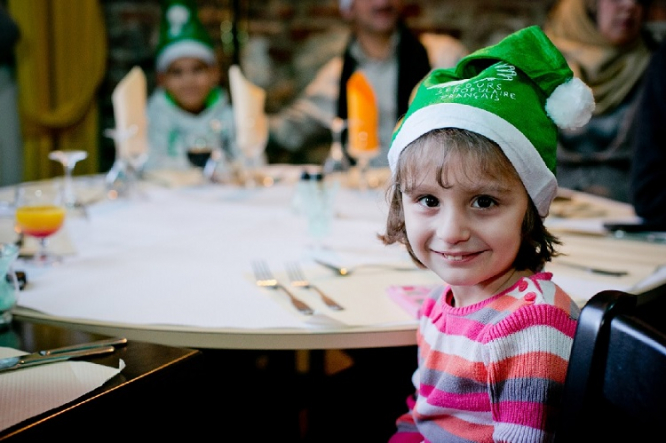 They have been sent by the Secours Populaire charity to help the traditional Father Christmas in red bring good cheer to those most in need.

Since 1976, the French charity has sent out volunteers dressed in green to collect money, food and toys to make sure the least well-off can also enjoy the festive season.

The colour green was chosen because it is the colour of hope.

You may see les pères noël verts at the entrance to supermarkets, asking for donations of seasonal food, or in town centres with collecting tins for money, or asking for new or second-hand toys in very good condition to give to children who might otherwise have no presents.

The green Father Christmases also organise festive meals, outings, shows and holidays. In 2018, the charity helped 433,490 people to have a happier Christmas.

Dominique Roche, from the Secours Populaire national headquarters, said: “From November until January 10, all our volunteers become pères noëls verts.

“Anyone can join in and become a volunteer and we welcome all forms of help.

“Perhaps someone might join a team wrapping presents in a shopping centre to raise money, or organise a collection of toys in their workplace. Each small gesture adds up to become something that can really help a lot of people.”

The charity, which was founded in 1945, estimates there are nearly nine million people living in poverty in France. It is also involved in overseas aid programmes.

Last year, Secours Populaire, with its 80,000 volunteers, helped 3.3 million people in France and the rest of the world.

There are five major campaigns each year, one of which is les pères noël verts, and Secours Populaire needs to raise more money than ever.