UK bells ring out a welcome in the Pyrenees 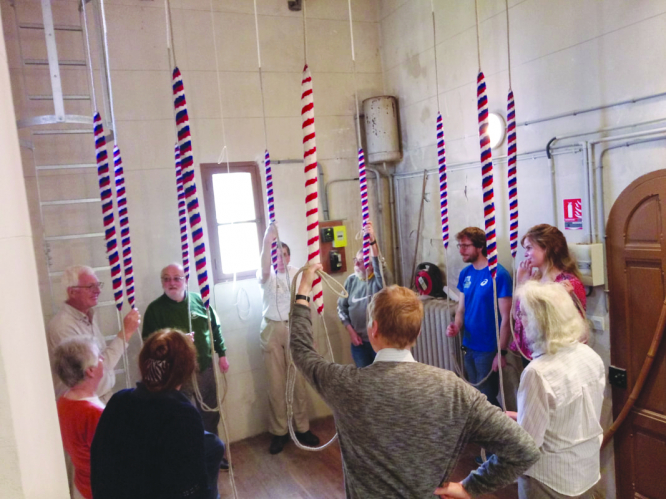 The 10 bells at Vernet-les-Bains in the Pyrénées-Orientales were cast by John Taylor & Co at Loughborough and were installed at the Anglican church of St George in April.

The idea came from Jeff Ladd who, with his wife Catherine, bought a second home in Vernet-les-Bains 20 years ago.

Both started bell-ringing when they were teenagers and felt there was an opportunity to introduce bells into the empty tower of the church.

Catherine died five years ago but Mr Ladd wanted to fulfil her wish.

The mairie, which owns the building, was happy to agree to the new project, and to the prospect of the sound of English bells in the town.

St George’s was built in 1912 at a time when the town was popular with British visitors who came to take the waters at the spa. “It took around four years to plan the project and eight months to get the bells made and installed,” said Mr Ladd.

“Six have been cast in memory of Catherine, with donations from family and friends and three are in memory of other bell-ringers.

Local people have been very supportive of the project.”

The bells were first rung on Palm Sunday and participated in the appeal from the Archbishop of Canterbury for churches across England to ring their bells at the same time on Maundy Thursday, following the Notre-Dame Cathedral fire.

Mr Ladd said the plan is to have a band of ringers so the bells can ring out every Sunday: “There are English bell-ringers who live nearby but we want to train new people and introduce it to the French.”

Almost anyone can learn this special skill, from children aged eight onwards. “It is like riding a bike,” said Mr Ladd.

“It takes about six or seven one-hour sessions to learn how to handle the bell, and after that you can build on your expertise and take it as far as you like.”

The Festival of Bells takes place on September 28 and 29. The bells will be dedicated in a church service on the Sunday and events are planned over the weekend.

Morris dancers from Wakefield will give demonstrations and workshops, and at least 90 bell-ringers from Britain are likely to take part.

Teams from the UK are already signing up for bell-ringing holidays in France.